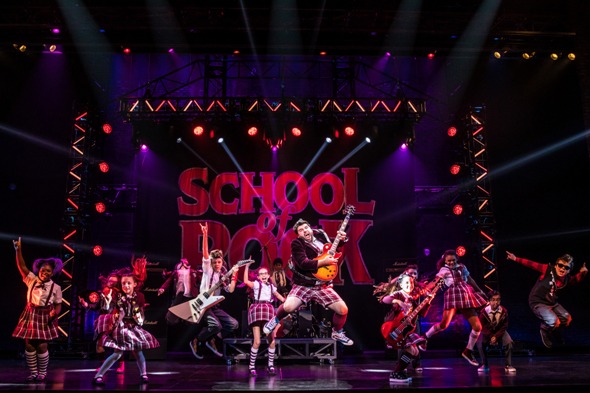 Review: National tour of “School of Rock,” the musical, presented by Broadway in Chicago at the Cadillac Palace thru Nov. 19. ★★★★

It was one of those rare chances – so I took it – to see the “School of Rock” twice. I caught two performances almost back to back, first in New York, where the show has been going strong since 2015, and then in Chicago, barely a month into the first national tour.

True to the spirit of the Jack Black film comedy about an aging rock ‘n’ roll wannabe who cons his way into a substitute teaching job and shakes up his class of uptight tweens, the Andrew Lloyd Webber hit is a hilarious slam dunk in both cities. But I actually liked the Chicago show better.

This new iteration of the musical seems so fresh it’s frisky, and the cast looks quite young, chosen no doubt with the expectation that some of the performers will shoot upward as the yearlong tour heads to Philly, Detroit, L.A., San Francisco, Dallas and points beyond.To get a glimpse of the young artists, rehearsing in New York as they get ready for the tour, check out this video:

The 12 kids who play the fifth-graders at Horace “high expectations” Green School are a diverse lot of terrifically gifted performers who do an adorable job of seeming awkward and gangly at first, hemmed in as they are by school rules, and shocked by the rumpled sock that has shown up at their classroom door preaching rock ‘n’ roll.

Soon their teacher – the irresistible wild man Dewey, pretending to be “Mr. Schneeeebly” – figures out there is no shortage of musical talent in the class, and the river of rock culture begins to flow through these students’ veins. 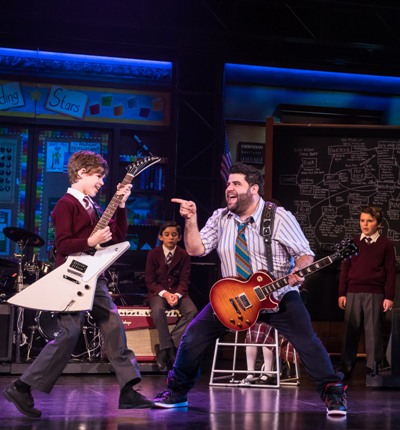 Guitarist Zack (Phoenix Schuman) gets an awesome axe, skinny cellist Katie (Theodora Silverman) becomes a phenom on the bass guitar, Freddy (Gilberto Moretti-Hamilton) and Lawrence (Theo Mitchell-Penner) are lions let loose on the drums and keyboard, respectively.  And a dynamite backup group of singers and crew takes shape as Dewey tickles their inner dreams and gets them jumping really high at the news: “You’re in the Band!”

The adult star of the national tour is the very funny Rob Colletti, who happens to have Chicago area ties including local schooling and a stint at Second City, along with Broadway bona fides including the comic side-kick Elder Cunnningham in “The Book of Mormon.” 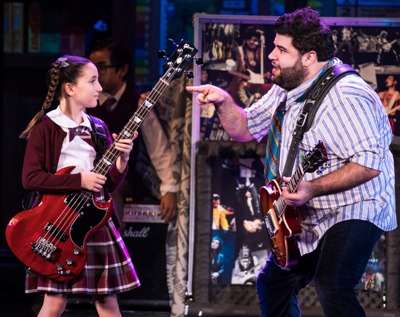 Colletti brings a roly-poly physique and a very quick wit to the role of Dewey, first spotted as the backup guitarist in a band of delicious mediocrity. While the lead guitarist is strutting the stage and singing “I’m Too Hot for You,” Dewey thrusts his frumpy self into the spotlight, hogging the mike and crooning the lines as if he’s the one who is God’s gift to women.

When Dewey is immediately fired, this scene rolls into another in which his best friend Ned’s demand for rent is met with a roaring wail of exasperation: Why suddenly now, after Dewey’s been allowed to mooch for years? Next, the hopelessly immature Dewey intercepts a call, intended for Ned, to do some subsitute teaching. And the game is on.

Lloyd Webber has such an ear for musical caricature that we comprehend immediately what type of school Dewey is walking into, just as we knew that his band was way below average: The principal (Lexie Dorsett Sharp) is channeling Mozart’s arch-villainess Queen of the Night, in a tyrannical aria from his opera “The Magic Flute.” We understand right away. This is a stiff upper lip with which one Does Not Contend. 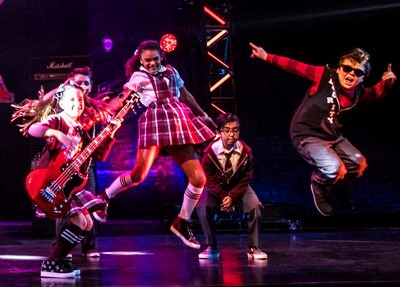 Naturally, Dewey considers this a romantic invitation, but by the time he softens up the principal, we alll see him as an endearing sweetheart worthy of a second chance.

It has been fashionable to criticize Lloyd Webber for not sustaining his billion-dollar stream of smash hits to the cutting edge of forever. But you’ve got to give the composer his due. He zaps right to the emotional core of all these characters. The ten-year-olds’ theme song, “If Only You Would Listen,” starts quietly enough in a single living room as one child tries to appeal a parent’s restrictions, then builds to a soaring choral commentary on the frustrations of life when you’re 54 inches high.

Will Dewey be able to inspire in these adolescents their own personal motivations for the song “Stick It To The Man”? Believe it.