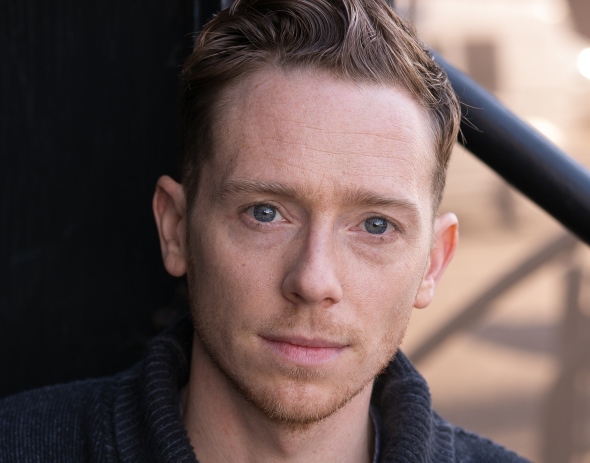 Interview: Haggard says he explored many paths in attempt to make the suppressed pain credible in Grant James Varjas’ “Accidentally, Like a Martyr” at A Red Orchid Theatre. Extended through March 15.

He’s buttoned up, reticent, visibly shielded against the world, the new guy who wanders into a gay bar in lower Manhattan. And Steve Haggard, who charges this muted character with an irresistible blend of charm and pathos in Grant James Varjas’ drama “Accidentally, Like a Martyr” at A Red Orchid Theatre, says the lost soul he plays seems so authentic because, in truth, he is.

“Mark is like someone I see every day,” says Haggard of the intriguing young man who shows up at a watering hole otherwise populated by regulars. “He’s put up all these walls and isolated himself so he doesn’t have to deal with a painful truth – the death of his lover. In my imagination, it was his first real relationship, and even though he thinks he’s moved on with his life, he has never really recovered.

“When he comes into the bar, which is a second home to three or four characters, he’s the odd duck. He obviously doesn’t belong there. He’s the guy on the train or at the coffee shop who basically says, ‘Don’t talk to me, I have nothing to give you.’”

Varjas’ play, though very funny at times, is pointedly about love, loss and loneliness, and those burrowing infections weigh on various characters in view. The symptoms are manifest, and Mark isn’t the only one in denial. Indeed, the devoutly imbibing denizens are only too happy to see the arrival of this interloper, and not least because he’s one good-looking guy. The fresh face is a welcome distracton. There may be a new possibility here.

Mark is thinking the same thing, though for a reason none of his observers could guess. He’s meeting someone, or so he hopes. Someone he’s hooked up with online, but whose picture he’s never seen. Now here he sits, by himself at one end of the bar, waiting, deflecting the occasional probing question. And sipping a drink. Then accepting another. And another – until he’s slowly pulled into the group. As he opens up, he may also be setting himself up. That’s the risk in honesty, in leaving one’s shell. 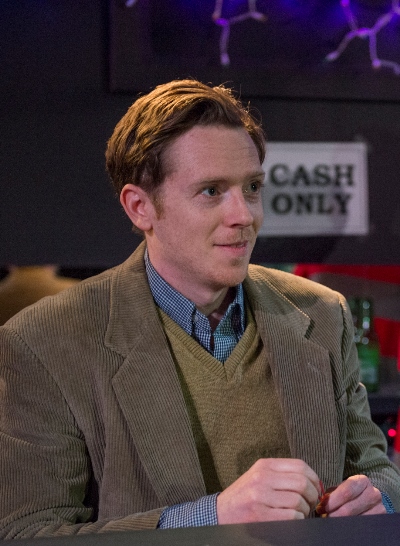 “When you first read ‘Accidentally, Like a Martyr,’ on the paper it seems there’s not a whole lot going on. It just reads like banter. But I was drawn in because the more you delve into these people’s lives, the more real they become. They talk like people talk.”

Keeping the dialogue real, preserving a sense not just of spontaneity but also of angularity, was constantly urged by director Shade Murray, says Haggard.

“Shade and I talked about this a lot,” he says. “Here’s a person who goes from being closed off to being quite open, and it doesn’t work if it’s too theatrical. It has to be uncomfortable, the way a real person gets drunk and begins to say things he’d never say to another person because they’re painful.”

Making it all feel fluid and credible, and consequently mesmerizing for the audience, says Haggard, depended on the kind of teamwork that is ensemble acting at its deceptive sharpest.

“At its core, this play is all about team effort,” he says. “There is no room for grandstanding. I can only do so much character work, and then I need these guys. We understood early on that how Mark feels from moment to moment depends on his interaction with these guys.” 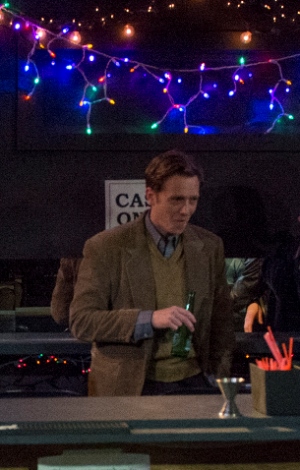 That coterie of barflies – measuring, challenging or empathic — consists of the struggling novelist Edmund (Troy West), the arch intellectual Charles (Doug Vickers) and the ex-cop turned coke head Brendan (Layne Manzer). “If Edmund is the patient listener, Charles and Brendan are the instigators, the catalysts, who intimidate Mark until he gets pushed a little too far,” says Haggard, “and then he finds his mojo.”

He finds it, genie-like, in a bottle. As the three regulars keep plying Mark with drinks, his caution begins to dissolve and he grows increasingly direct, even confrontational. In one of the most remarkable aspects of his performance, Haggard plays that progression with disarming conviction, by halting degrees, Mark’s impetuosity inexorably overtaking his normal, sober circumspection. Haggard calls that arc his drunken journey.

“It was huge for me,” he says. “It’s the difference between saying your lines and capturing their context. If I said those things without being drunk, you’d care and you’d be sad, but that wouldn’t fit the play. You don’t want it to be too ‘actory.’ Shade and I never really talked about it. He just let me explore it. Sometimes, for me, talking about it kills it. My job is not to deflate the action, but to keep it going. There can’t be any pauses for ‘theatrical moments’ or the play would fall flat. It’s a navigation.”

An ironic turn of phrase. In the end, Mark’s bobbing boat crashes on the shoals of tragedy. He never sees it coming, the shattering surprise.

“Honestly, it was making mistakes that put us on the right path with Mark,” Haggard says. “In rehearsal, we did it every which way under the sun, just trial and error, until he felt like a guy I’ve talked to in a bar.”