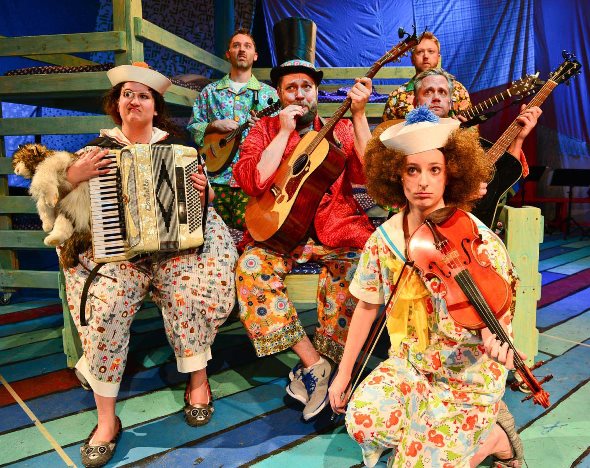 Preview: After Dec. 5 opening of Gilbert & Sullilvan’s ‘HMS Pinafore,’ the company will intersperse revivals of its slimmed-down, high-spirited ‘Pirates of Penzance’ and ‘The Mikado’ through Feb. 7, 2015.

Of all the improbable theatrical cross-cuttings, the inspiration for The Hypocrites’ singers-with-instruments spin on the Gilbert & Sullivan canon may take the prize. The model for artistic director Sean Graney’s rethinking of all that lighter-than-air G&S wackiness was a Broadway production of Stephen Sondheim’s dark, dark (albeit very funny)  musical “Sweeney Todd: The Demon Barber of Fleet Street” – where there’s nary a modern major general in sight. 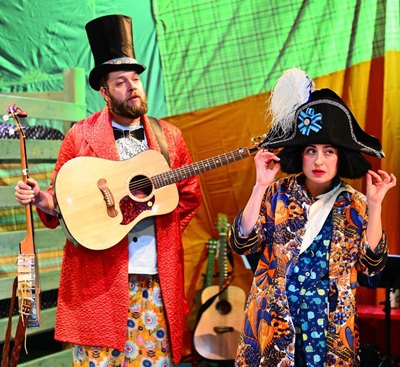 Graney’s plucky company completes its hat trick of presenting the most popular of G&S operettas with the Dec. 5 opening of “H.M.S. Pinafore,” soon to be followed by revivals of recent Hypocrites productions of “The Mikado” (Dec. 13) and “The Pirates of Penzance” (Dec. 20). The three shows will then run in repertory at The Den Theatre until Feb. 7, when all three will be staged in a grand marathon finale.

“We’d been doing some musicals like ‘Three-Penny Opera,’ which our audience enjoyed,” recalls Graney, explaining how he arrived at the intersection of Fleet Street and Penzance. “I like to work with public domain material where I can do my own thing. If you do ‘Cabaret,’ you’re not allowed to change anything. That’s not where my wheelhouse is as an artist.

“I saw ‘Pirates of Penzance’ in college, and dimissed it. Then a few years ago, I heard the Kevin Kline recording and got quite a different impression. The show is so smart and funny and respectfully subversive. It calls attention to society’s faults without being heavy handed.” 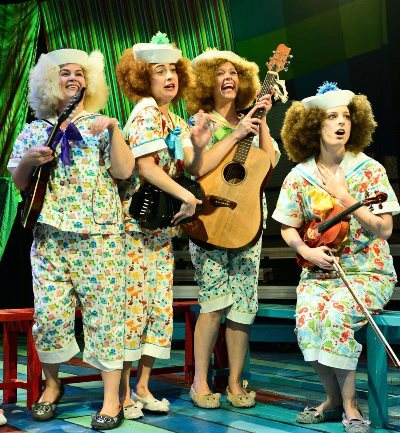 Graney stored that new appreciation in the back of his mind and waited for a workable way for his little company do to this sizable operetta.

“I knew we wouldn’t be able to do a Lyric Opera production, and besides I wanted to explore it in my own way,” he says. “Then I saw (director) John Doyle’s ‘Sweeney Todd’ on Broadway, where he had the singers all playing instruments – and no band in the pit. And I thought, Aha! I could do that with ‘Pirates.’

‘We reduced the script to 10 performers, all singing and playing instruments – guitar, banjo, violin. And they were all dancing. That was five years ago, and that first year with ‘Pirates’ it felt like everybody was running uphill. We were all so exhausted. It was really hard, but it was also tense and exciting. We felt like we were doing something new and interesting. We had no idea how the public would respond, but they loved it.”

So Hypocrites remounted ‘Pirates’ the next year, then created a companion production of ‘The Mikado.’

“We have some amazing musicians and some amazing voices,” says Graney, “and there’s always this great spirit in the room. After five years, everybody has learned from each other. The singers have put in serious study on their instruments and the instrumentalists have worked on their singing. It’s not your daddy’s G&S.

“The old (London) D’Oyly-Carte company put its stamp on G&S. They were the punk-rockers of their day, but that feeling isn’t necessarily translated to modern audiences. Rather than that exact precision, we have this wonderfully sloppy mess that’s wonderfully put together. We absolutely drill the music. Small errors happen, but they don’t detract. I think G&S would appreciate what we do.”

Along with the sing-and-play angle, there’s another essential difference in the way Hypocrites does these riotous shows. Which is to say they heighten the riot by melding performers and audience. You don’t just watch ‘The Mikado’ or ‘Pirates,’ you’re in it.

For those who might prefer to just sit and watch, about 100 seats are provided.

“Pinafore,” Graney admits, has posed a greater challenge than either of his previous G&S ventures. “Making a new show is always a lot of work, but the music in ‘Pinafore’ just isn’t as easy to make sound awesome or to make it fit what we’re doing. We’ve had to look deeper into the score. And we’ve added a bit of percussion.”

The director says audience feedback has been enthusiastic and generally falls into two categories. For people with little or no experience in G&S, he says, the Hypocrites’ crazy mash-ups are revelation.

“For the really die-hard fans who’ve seen all these shows a million times,” he says, “it’s like a karaoke version.”

Tags: Gilbert and Sullivan, H.M.S. Pinafore, Sean Graney, The Hypocrites, The Mikado, The Pirates of Penzance