Imagine that consummate romantic legend of heroic Tristan and beautiful Isolde, thrust together into illicit love by circumstance and a potion, as a tragi-comedy. No? Can’t conceive of that? Then you have yet to see the visiting Kneehigh theater company’s outlandish “Tristan & Yseult,” which now bounces about the boards at Chicago Shakespeare Theater. 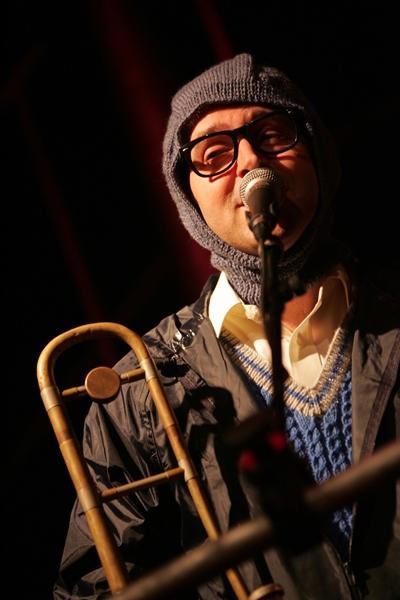 Kneehigh, based in the very Cornwall where the Tristan tale is centered, practices a sort of latter-day commedia dell’arte, punching up all manner of stories with music, farce, silly costumes, manic digressions and pratfalls. It is a physical, highly polished troupe, its great energy matched by its embracing appeal.

Beneath all the absurd trappings, Kneehigh’s “Tristan & Yseult” is a pretty straightforward account of one version of the story apparently from the mid-13th century – or about a hundred years later than the legend famously borrowed by Richard Wagner for his 1859 opera. But the two narratives differ significantly in their last acts, so to speak.

Common to both is the story of how brave Tristan, having well served King Mark of Cornwall in battle against the Irish invader Morholt, is dispatched to Ireland by the king to bring back Morholt’s beautiful sister Yseult – or Iseult, Isolde – to be his royal bride. But Tristan bears with him a severe wound he has suffered in battle and is near death by the time he reaches Ireland. By chance, he is brought to Yseult, famed for her healing skills. She restores him, only to discover that the cause of his wound is a blade fragment that matches the piece she has recovered from the ashes of her slain brother.

Though now filled with hatred for Tristan, who obviously has killed her brother, she is nonetheless forced to accompany him back to Cornwall. What happens en route is variously told. In Wagner she implores her attendant Brangäne to bring her poison, but Brangäne can’t bear the idea and substitutes the fateful love potion, which both Isolde and Tristan unwittingly imbibe. Kneehigh follows a variant in which Yseult asks for the love potion so that she, having no other choice, might submit more freely to King Mark’s embrace. 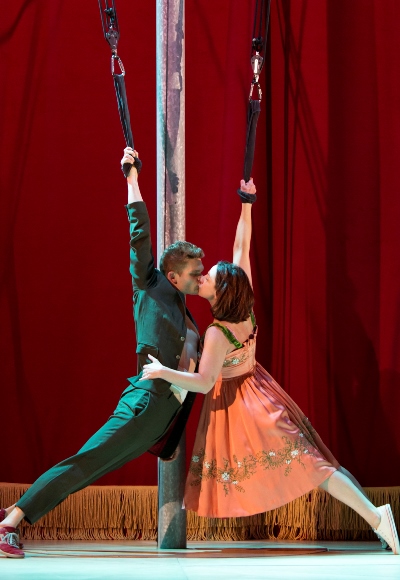 But here is Kneehigh’s tragi-romp at it wackiest: Yseult’s attendant Brangian — played with hysterical, over-the-top, indefatigable parody by Craig Johnson – sets out identical bottles of clear liquid, one containing the potion for Yseult, the other wine for Tristan, with the laughter-eliciting precaution not to get them mixed up. Which they promptly do, ending up in a tumble right there on the deck as the ship hoves into harbor – leaving frantic Brangian to cover for them as best she can.

That loopy interlude notwithstanding, the central characters – Andrew Durand’s earnest French-speaking Tristan, Etta Murfitt’s passionate but guilt-ridden Yseult, Stuart Goodwin’s high-minded King Mark – play the story straight. But they’re surrounded by a kind of Greek chorus of loonies dubbed the love-spotters, clownish interlopers who can only observe love from a distance but never share in it. Sock-like woolen headgear disguises the love-spotters, allowing the principal actors to join and leave the group as the story spins out.

Just as the similar betrayal of King Arthur by Guinevere and Lancelot is revealed by the dastardly Mordred, the Tristan legend has its own whistle-blower in the jealous courtier Frocin – embodied here with comical, though unmistakably genuine, malice by Giles King. One of the show’s best gags has Frocin trying to photograph Tristan and Yseult in a tryst, creeping up and down a pole at right angles to it, supported by ropes pulled by the love-spotters. 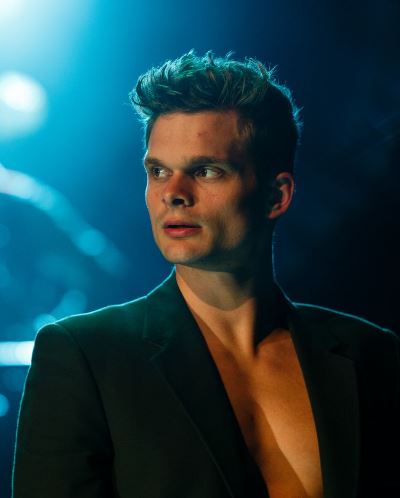 Where this tale veers sharply from Wagner is in its last chapter, which is in fact based on one stream of the legend: The potion wears off, and Yseult goes back to Mark. Tristan, banished, marries another gorgeous girl called Yseult, in whom he sees only his lost lover. This is Yseult of the White Hands, imbued with affecting humiliation and jealousy by the multi-talented Carly Bawden, who also offers splendid vocals with a live band and proves to be a terrific dancer as well.

Consistent with this less-familiar strain of the Tristan story, the hero languishes in the original Yseult’s absence. Metaphorically, his old wound begins to weep again. He sends for his healing angel, which only inflicts pain in the heart of his new Yseult. But she gets her vengeance even as Tristan’s first beloved rushes to his aid.

Watching this comedy that runs so directly against the grain of a bona fide tragedy brings to mind the last scene of Leoncavallo’s opera “I Pagliacci,” where the on-stage audience is chortling at slapstick as we in the house know we’re watching a man going over the edge into murder. But the pervasive craziness here exceeds even that. It’s a bizarre entertainment, an existential frolic: Samuel Beckett meets Mel Brooks. 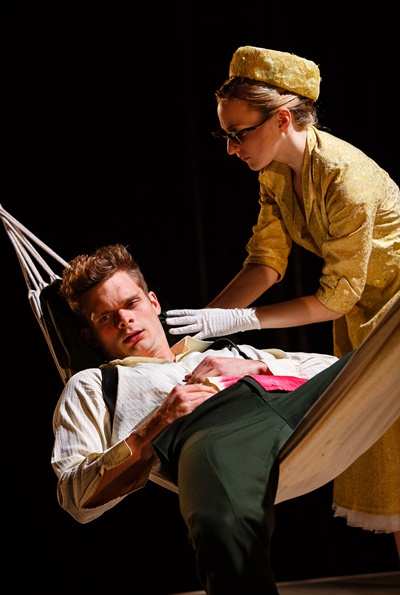 Adapter-director Emma Rice, the company’s co-artistic director, has reset the story in roughly the 1960s: Yseult of the White Hands wears a full skirt with a box hat. That works. What’s less convincing is Rice’s decision  — with writers Carl Grose and Anna Maria Murphy — to set most of King Mark’s speeches in iambic pentameter, often in rhymed couplets. The poetic imagery, especially in the rhymed endings, is too frequently pedestrian and forced.

And then there’s the high-risk gambit of using Wagner’s “Tristan” music, an orchestral recording, as an expressive baseline – indeed, in the end lifting the whole emotional vessel on great waves of that transcendental, transfiguring sound. It’s a bit like cheating dramatically. Is it the rather unimaginative language of the play’s last lines to which we are responding, or the breathtaking power of Wagner’s pen? I have my own answer.