‘Buzzer’ at Goodman: New day in neighborhood, but its bright promise is shadowed for 3 friends

As Tracey Scott Wilson’s urban tragi-comedy “Buzzer” spins through a series of introductory monologues, its mordant wit and coalescing picture of a ménage à trois suggests an updated bundling of the two young men and a woman in Noel Coward’s “Design for Living.” Though the laughs keep coming in “Buzzer,” the comedy soon hones the edges of a bitter tale — of love and hope infected by torment and fear. Goodman Theatre serves it up as potent brew. 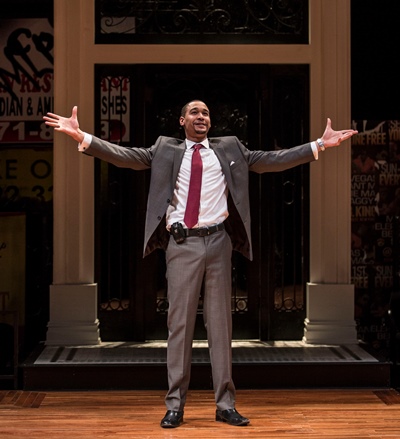 Jackson is a smart, focused and ambitious black man who escaped the mean streets of his childhood in a New York ghetto. Now he’s back, Harvard law degree in hand, to stake his claim in the gentrification of the old neighborhood. To an outsider like Jackson’s white girlfriend Suzy, the area still looks pretty unsavory. But Jackson says it’s just a matter of time till Starbucks moves in and rents shoot sky-high. Fact is, he’s bought the very apartment he’s showing her. The future belongs to them, and it’s going to be great. She’ll see.

Whatever Suzy’s misgivings may be about the location, however, they’re nothing compared with the shock she gets when Jackson tells her they’re going to be sharing these digs with their old pal Don. 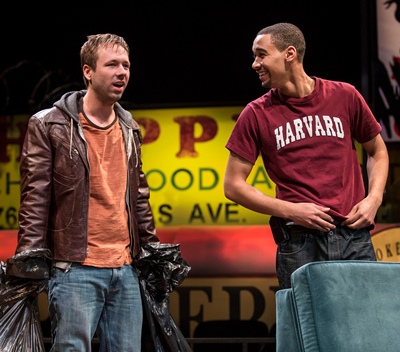 Lovable Don happens to be on a perpetual merry-go-round with drugs. He’s quit a zillion times, and he keeps turning up like a lost puppy at the doorstep of faithful friend Jackson and long-suffering Suzy. Don’s wealthy father helped Jackson and his mother when the boys were young, and Jackson honors that debt in his constancy toward his troubled friend.

This time, however, Suzy begs Jackson not to let this confirmed loser crash with them. He’ll fall off the wagon just like he always does. Why do they have to take him in again? Why, why, why? But Jackson is resolute, and Suzy capitulates – only when he agrees to a time limit, a few months. And they agree that if Don gets high, he’s out. 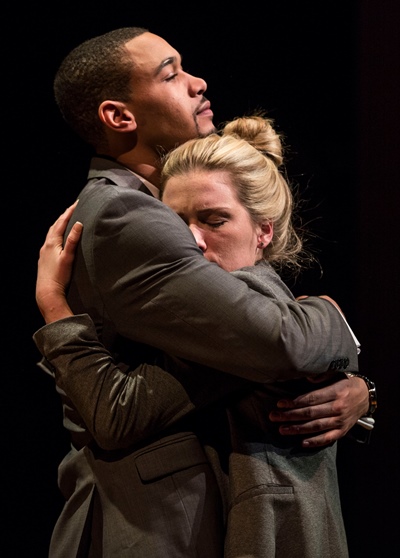 Wilson’s emotionally and socially complex, closely crafted play hits its stride when Don enters with his worldly possessions in two garbage bags, and three lives begin an inexorable tumble into chaos and heartbreak.

The dynamics are electrifying among Goodman’s three principals — Eric Lynch as the proud, straight-talking but not altogether clear-sighted Jackson; Shane Kenyon as the drug addict who keeps looking for answers with this couple; Lee Stark as the woman in the middle with more knowledge of the situation than Jackson could ever guess. And where an ascendant black man perceives a once-tough neighborhood on the cusp of reclamation, his white friends see a scary place inhabited by taunting, ominous characters who may not be ready to hand it all over to this new wave of rich interlopers, black or white.

The building’s front-door intercom – the buzzer — doesn’t work properly. When the buzzer sounds in Jackson’s apartment, the occupants can’t hear what the person on the street is saying. Which means somebody has to go down and answer the door. Jackson says he’ll get it fixed. Don and Suzy would like that to happen soon. 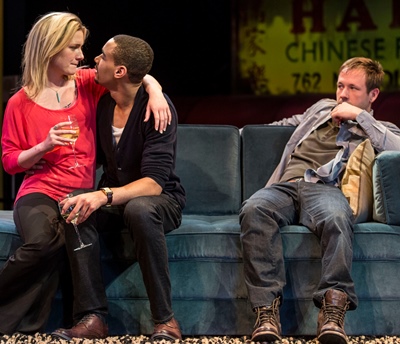 Meanwhile, Suzy – an experienced teacher who knows how to handle mouthy kids — isn’t just imagining the rough stuff she’s hearing from the temporarily unemployed on the street. Jackson says he’ll talk to the offenders if she’ll just point them out. Don’s counsel: Don’t even think about approaching those guys; they’ll kick your butt. Stress rises in the apartment, some deep stuff surges to the surface, and one day Don vanishes – only to reappear just as suddenly. Jackson demands to know what’s going on.

Lynch, tall and lean, cuts a credible, indeed imposing figure of a man who will not be played with or put off. He’s like a strong head coach, direct and unequivocal. It’s a volcanic scene, and exemplary of director Jessica Thebus’ perceptive work, as the squirming objects of Jackson’s glare — Stark’s mortified Suzy and Kenyon’s evasively muttering Don — struggle to circumvent the shattering truth.

Funny thing about the word gentrification, this idea of genteel transformation. Jackson is a gentle soul who wants to see the upgraded image of himself reflected in the streets below. Yet at the end of “Buzzer,” this good man and the two people closest to him are all in a tough place. And no reclamation is in sight.