A meeting of minds, of sensibilities, between director Ron OJ Parson and playwright August Wilson illuminates a lyrical, joyful and heartbreaking production of Wilson’s “Seven Guitars” at Court Theatre, delivered by an ensemble that’s as sly as it is polished. 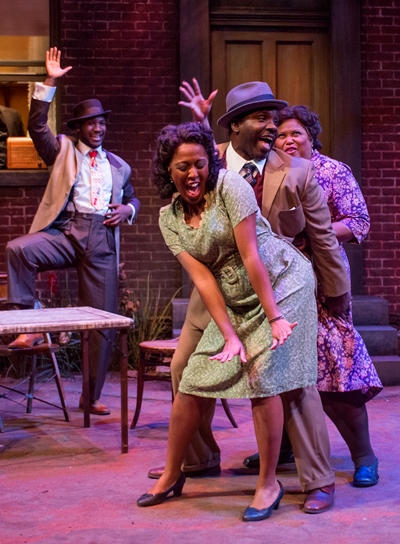 In Wilson’s suite of 10 plays chronicling the urban African American experience, decade by decade through the 20th century, “Seven Guitars” represents the 1940s – 1948, to be precise, in the Hill District of Pittsburgh where most of Wilson’s cycle is set. “Seven Guitars” is about a blues musician called Floyd “Schoolboy” Barton, a talented, charming rascal who tempts fate for a second chance. It’s about reaching for the stars only to be flung back to earth by the gravity of circumstance.

That ponderous condition, here as in all of Wilson’s plays, is aspiring to anything while being black. And though the seven characters of “Seven Guitars” seem to raise Wilson’s typical component of frustration and bitterness over the limits imposed on black people by white society, their prevailing lust for life elicits real admiration for ordinary folks just trying to – I believe the phrase is get along.

Floyd Barton, however, is far from ordinary. Played by Kelvin Roston, Jr., with an infectious mix of exuberance, willfulness, and bravura, Floyd is a man with an electric dream. He has an electric guitar, too, but he put it in hock before heading to prison for 90 days after a run-in with The Man. Now he’s back on the street with a recording that’s suddenly become a hit and an offer from the record company in Chicago to cut another disc. 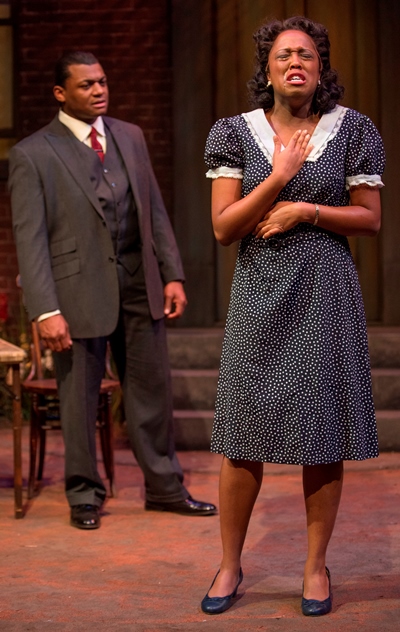 But Floyd has a big problem: He can’t come up with the money to retrieve his electric guitar. And we know up front how his desperate, crazy to find the cash and get on with his fledgling career will end. Not well. When the play begins, Floyd is already dead.

Thus “Seven Guitars” becomes a Requiem, the mourning and celebration of a life that might have been and almost was. Like all the other chapters in Wilson’s vibrant book of theater, this play bursts with musical affirmation, with the singing and dancing of souls whose light cannot be extinguished. They are at once street-smart survivors and lilies of the field, ever bending toward the sun.

Floyd’s girlfriend Vera – portrayed with ineffable radiance and credible pain by Ebony Wimbs – was left in the lurch when he ran off to his first Chicago gig with another woman (someone who had faith in him, he says). Disillusioned and angry, Vera rebuffs Floyd’s claims that it will be different this time, even as she wants to believe. 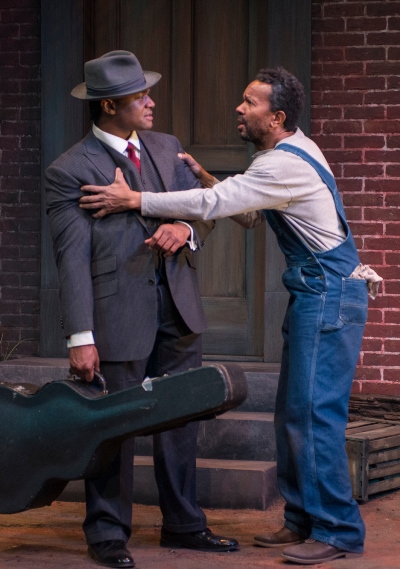 His sidemen, drummer Red Carter and a harmonica player called Canewell, are just biding their time until Floyd’s ready to hit the road for Chicago. As Red and Canewell, Ronald Conner and Jerod Haynes cut a slick pair of hipsters, glib talkers with a fine cut to their clothes. (Costume designer Christine Pascual addition to this show can hardly be overstated.)

The odd man out here is the Haitian-born Hedley, Wilson’s familiar Shakespearean fool, played with beguiling simplicity and directness by Allen Gilmore. Hedley, who scrapes through by selling frying chickens and eggs, is a self-styled visionary and perhaps mentally ill. He says his abusive, now deceased father appeared in a dream promising that the legendary jazz cornetist Buddy Bolden would one day show up and bestow great wealth upon him. Hedley’s still waiting. 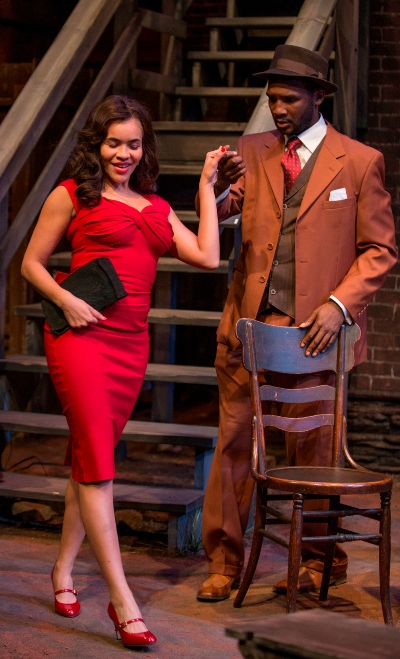 Completing Floyd Barton’s immediate circle of friends are two women, the middle-aged and worldly-wise Louise (the deliciously sassy Felicia Fields) and the just plain delicious Ruby, embodied – I choose that word advisedly – by Erynn Mackenzie in a performance that fits the part like her red dress. The boys fall over each other to snare Ruby’s attention.

The modestly homey set created by Regina Garcia and the dramatic lighting scheme by Marc Stubblefield make key contributions to the story’s narrative fluency and plausibility. But it is Ron OJ Parson’s unseen hand that has liberated and focused a marvelous cast to produce an aura of life spontaneous and volatile. We’re engaged by each of these wonderful characters, and by all of them together. 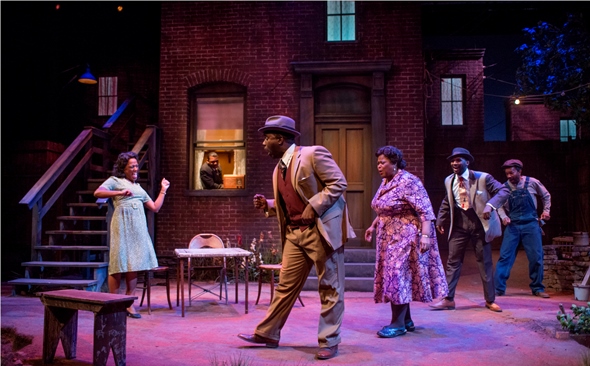