Amid a storm of obscenities, but with a flair, Steppenwolf pulls off a hysterical ‘Hat’ trick

Jackie, out of the pen and off the stuff, finally has a legit job and a girl he’s crazy about. OK, Veronica is a dope addict, but really it’s all good. Then Jackie spots the hat, some guy’s hat there on the little table in the crummy apartment he and Veronica share. So who’s the guy, he asks, who’s the ________ with the hat?

And that’s the gist of Stephen Adly Guirgis’s title “The ________ With the Hat,” a very smart, raw, funny and poignant play that sizzles at Steppenwolf Theatre under the direction of Anna D. Shapiro, who also directed the play’s Tony Award-nominated premiere on Broadway in 2011.

Guirgis, to be sure, did not call his play “The ________ With the Hat.” He filled that blank with a coarse four-syllable epithet that’s repeated often in gritty dialogue rife with the really short words the world ironically characterizes as adult language. There’s also no conceivable substitution for Guirguis’ compound substantive. Anyway, amid the virulent verbal storm, our missing word is just a fat droplet in the downpour. But if this show’s rude stream is relentless, it’s also convulsion-inducing funny. And then it isn’t.

Steppenwolf’s production, as wise as it is earthy, gets after “The Hat” from all sides in a balanced, brisk ensemble effort framed by Todd Rosenthal’s vividly detailed sets that revolve through three different locales. Add to this Donald Holder’s dramatically inflected lighting and you have a play experience so authentic you forget there’s a boundary between you and the stage.

Listen through the torrent of obscenities and you find a finely crafted urban morality tale that well might be set in any locale at any time, and certainly in any language. “The Hat” makes potent connections with big themes like trust, self-knowledge and the meaning of friendship.

John Ortiz is an irresistibly delusional loser as Jackie, whose missteps in love and life are all inadvertent, circumstantial and incidental. Never mind the little slips and sips, in his heart he’s always on the wagon and no way – seriously, man, no _____ way — would he ever play false to Veronica.

Sandra Delgado’s Veronica is a keg of gunpowder with a short fuse, a sexy babe with a limited but expressive vocabulary and some issues. Though filled with love and hope for Jackie, Veronica is also firmly hooked on what she’s snorting and quick to lash out at any man who questions her, well, the word she uses is integrity. 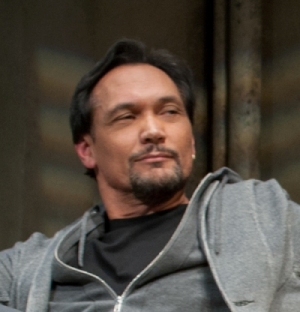 When Jackie and Veronica are getting it on, the room lights up and the air pops. But then the hat chills that, and it’s an accusation-laced, profanity-riddled downhill ride from there. You do have to hand it to these two, though: They know how to say a plain thing plainly.

And yet, what makes the performances by both Ortiz and Delgado more than a rage fest is the vulnerability they bring to their outwardly feral characters. In Delgado it’s a mobile face that conveys a heartbreak born of perpetual desperation and confirmed hopelessness. The actor’s eyes alone speak with a glistening eloquence that transcends the character’s verbal borders.

Ortiz shapes Jackie’s arc by different means, through the art of attentive listening and a knack for precise timing. Jackie finds himself listening a lot – to the moralizing life lessons of his AA sponsor, Ralph, in the physically imposing and evangelically persuasive form of Jimmy Smits. A reformed lush and druggie himself, Ralph gives Jackie no behavioral wiggle room. Yup, as Jackie’s committed friend, Ralph is a stand-up guy. On that score, Jackie has no doubt. 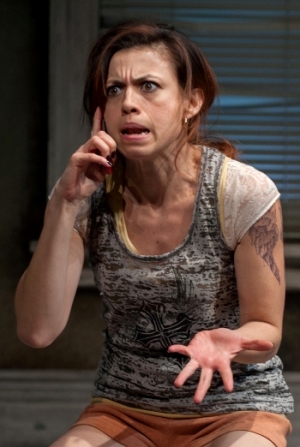 But there’s another guy in Jackie’s corner as well – his gay cousin Julio, a health food and conditioning nut played with an airy edge and irresistible charm by Gary Perez. When Jackie goes to Julio with a special problem, he gets a lecture but also ultimately a reminder about the roots and depth of true friendship.

While “The Hat” turns largely on the interaction of the three guys, the AA sponsor’s unhappy wife (Sandra Marquez) also has something for Jackie’s well-bent ear.

As for the hat, and ­­­­­­­­­­­the ________ who owns it, suffice it to say Jackie gets a gun, shoots the gun and has to get rid of said gun. Both the hat and Jackie’s relationship with Veronica undergo adjustment. If only the former is funny, the whole mixed up wake-up makes for brilliant theater. 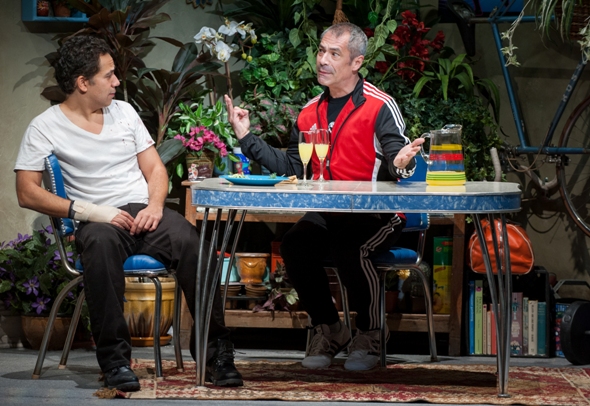