Review:  “The Cripple of Inishmaan” by Martin McDonagh at Redtwist Theatre through July 1. ****

The last time Martin McDonagh’s brutally funny play “The Cripple of Inishmaan” came to Chicago, it was in March 2011 at the spacious main stage of the Chicago Shakespeare Theater.

Druid, a Galway-based theater company that tours widely, had designed its traveling production for proscenium theaters, and so the actors kept their physical distance from the audience while creating wickedly exaggerated characters. The story, set in the ’30s, concerns a sparsely populated island off Galway Bay whose eccentric citizens become transfixed by the stunning news that Hollywood big shots have arrived on the next island over, to recruit locals for the shooting of a whaling adventure “filim.”

Now it’s Redtwist Theatre’s turn, in their claustrophobic little space in the Bryn Mawr Historic District, which turns out to be equally fine for the purpose, but in a different way. 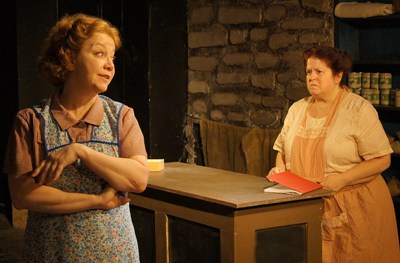 This time we’re right inside the rustic walls of the little Inishmaan store that’s inhabited by the stubborn aunties of Cripple Billy. Director Kimberly Senior brings us face to face with these nosy pessimists and all the other colorful characters in this tight-knit and ready-fisted community. They seem rugged and plenty quirky, but entirely human. It’s as if we’re getting a chance to know them a few decades before the story-tellers spun them larger into legend.

Given McDonagh’s savage humor, his delight in shock and his tolerance for pouring buckets of blood over intimate moments — his film “In Bruges” is a case in point — there can be little doubt he intended the denizens of Inishmaan to be every bit as outlandish as Druid made them. Yet even McDonagh would find himself enchanted by the gentler humor and tragic grace of the story as it plays out in this winning Chicago production. 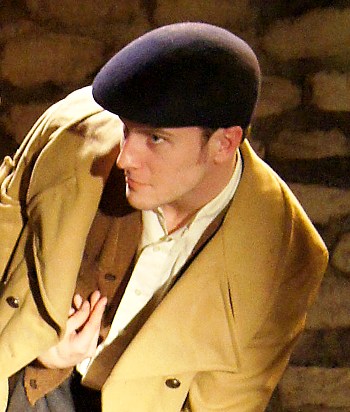 Cripple Billy, the play’s title character, was for Druid a boy with withered extremities and pathetically twisted looks so alarming his aunties feared he’d never marry. At Redtwist, Billy is played by the strapping Josh Salt, whose flaws seem fairly minor given the over-protective worries of his aunties (portrayed with dotty charm by Debra Rodkin and Jan Ellen Graves).

Slippy Helen in Druid’s production is a tall town bully who you readily believe has been terrorizing people ever since since she was accosted by a priest at the age of 6. At Redtwist, Helen’s a spunky, petite thing (the delightful Baize Buzan) whom you’re actually rooting for as she breaks raw eggs over people’s noggins. Her younger brother, Bartley — who in Druid’s production is so singly-obsessed with candies as to seem mentally challenged — is at Redtwist a multi-dimensional pal to both Billy and Helen. (Bartley’s played with heart by Patrick C. Whalen.) 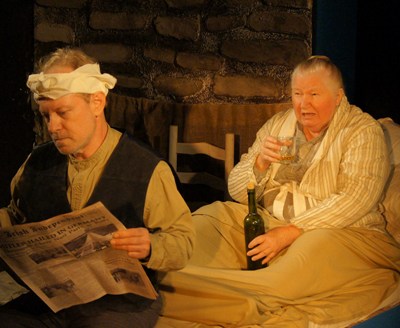 A subplot that takes charming flight here is the saga of Johnnypateenmike, the island newscaster and gossipmonger (not necessarily in that order) and the 90-year-old Mammy he’s been plying with booze for decades in hopes of hastening her early demise. So close are we to Kathleen Ruhl as the cheerfully cooperative alcoholic that we can see her ruddy face and lip-smacking eagerness as she prepares to please her son by draining another half bottle of the stiff stuff before noon. The riotous interplay between Brian Parry as the enabling son and Chuck Spencer as the horrified doctor, who’s been called to Mammy’s bedside, is a fine run of drinking jokes in the best Irish tradition.

So it’s in this intimate anti-Mayberry that we learn about butchered cats and strangled geese and get some hints about the truth surrounding the death of Billy’s parents while he was yet an infant. The sea is deadly, life is hard and tenderness comes to Inishmaan rarely, as a fragile sprout that pokes through windblown turf. 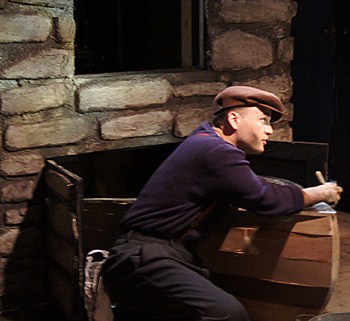 Billy’s oppression is real, stuck as he is in a community that pushes people into lifelong pigeon-holes before they’re out of childhood. His need to leave is underscored in many ways. Two excellent scenes in the play are confrontations between Josh Salt’s Billy and the boatsman Babbybobby, brilliantly played by Chris Rickett as a struggling widower, taciturn without, boiling within. In their first encounter, Billy is on a mission to convince Babbybobby — however he can — to ferry him to the island where the Hollywood crew is said to be hiring. The second time, Billy will have some serious explaining to do.

As Billy’s “filim” adventure takes its perilous twists and turns, life goes on in Inishmaan. Senior’s sure directorial hand is apparent in her attention to small town behavior, as time affords endless examination and re-examination and little of any import escapes shared scrutiny.

The leisurely pace belies smart, swift scene changes in minimal space made possible by the room-transforming traps, flaps, drop-downs and chiaroscuro effects of set and lighting designer Jack Magaw. So believable is the picture created of a rustic fixation on all events big and small, that it comes as a distinct pleasure to learn certain secrets on this particular island have been well kept after all. 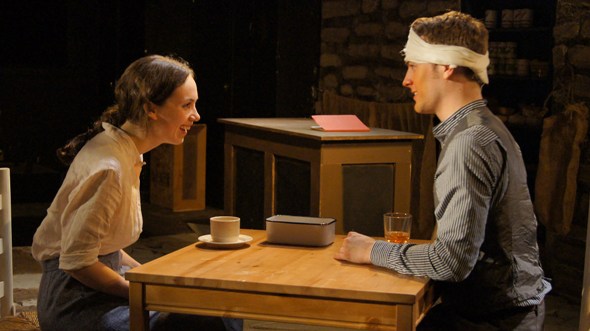