‘Penelope’ at Steppenwolf: Four guys in an empty pool, down to life’s last threads

Review: “Penelope” by Enda Walsh at Steppenwolf Theatre, through Feb. 5   ***

Four desperate men wearing Speedo swim suits confer in an empty pool, the last survivors of a long siege. They know their time is short. They must claim victory now or face certain death. This is not funny.

OK, I take that last part back. Actually, it’s very funny, in a weird and twisted way. 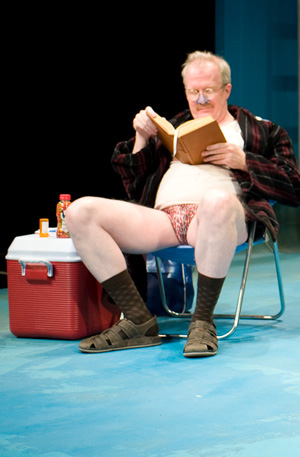 This is the scene of Enda Walsh’s play “Penelope,” a time-warped perspective on the suitors who hope to win the wife of Odysseus as that wily and iron-hard hero of the Trojan War sails homeward at the end of a 20-year absence.

Like the Speedo-clad quartet, we know the scene after the curtain drops will be pretty bad for these sorry vultures. They’re all going to die. At the end of Homer’s “Odyssey,” the great warrior and his worthy son Telemachus see to that. But in Walsh’s witty, albeit head-scratching entertainment, now on the boards at Steppenwolf Theatre, these guys think they can out-maneuver Odysseus and save themselves by enabling one of their number to win the hand of faithful Penelope.

Walsh might have put his four buffoons in clown suits, but that’s what genius is all about: He stuffs these – uh, typically assorted – bodies into bikini briefs that shouldn’t be worn in public by anyone not in training for the Mr. Universe competition. And thus the feckless foursome strut about, dare I say the embodiment of unself-conscious pathos.

Though mostly in their middle to later years, one of them, called Burns (Ian Barford), looks to be in lingering youth. He’s not especially fit, but young enough not to have lost all human compassion and sensibility. The eldest, perhaps in his sixties, is the benignly philosophical chap and bookworm Fitz (Tracy Letts). Then there’s Dunne (Scott Jaeck), pompous, windy, indeed bellows-bellied. What a fine figure he cuts in his Speedo, his stomach preceding him.

The fourth suitor, Quinn (Yasen Peyankov), is a different creature from the rest, a good figure of a man in his early middle years: iron-pumping, calculating, savvy, savage. He may be no match for Odysseus, but he plays his pals like a bouzouki and he’s confident Penelope can be won and that their lives – well, some of their lives, his – can be saved. 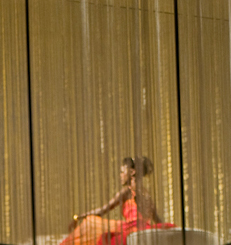 The play’s eponymous prize (Logan Vaughn) appears several times, but does not speak. She doesn’t need to, really. Let’s just say Penelope transcends words. Quite apart from Odysseus’ lands and titles (the suitors have already butchered his cattle and drained his wine cellar), the beautiful Penelope might be reward enough for men to risk everything.

And so the remaining few contestants, with one eye on the ominous sea, plot how to speed their quest. We can see the waiting game hasn’t worked. Homer tells us the suitors were many, and piled about designer Walt Spangler’s swimming pool set we see the discarded lounging chairs once occupied by competitors who have abandoned hope or perhaps perished in the infighting.

We get a strong scent of the lethal struggle, and with it a vivid sense of young Burns and the vicious Quinn, as the two suitors debate the most recent death amongst them, the suicide of a man whom Burns had come to regard as a close friend. While Burns contends it was Quinn’s taunting that pushed his friend over the brink, Quinn the political realist dismisses Burns’ fellow-feeling as sentimental rubbish, observing that deep down Burns tacitly approved of this removal of one more challenger.

Ultimately, the gang of four hatches a plan to put all their support behind the one who can win Penelope, and here director Amy Morton’s sharp ensemble vision narrows to underpin stunning monologues by each of the four actors. It is the playwright who is not altogether convincing. 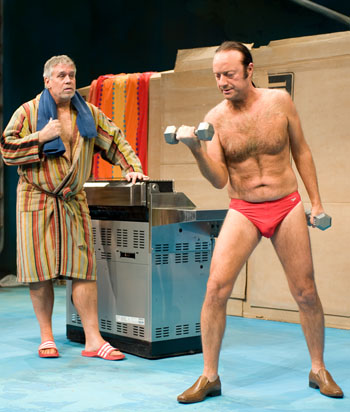 As the bulbous Dunne, the delightfully inflated and posturing Jaeck addresses Penelope in a rhapsodic speech full of sound and imagery signifying a delusional mind. Letts – who took over the role of Fitz when John Mahoney became indisposed – has the play’s one truly great moment, when the philosopher chokes into speechlessness at the sight of Penelope, then drifts into an eloquent disquisition on his life as nothingness and glorious Penelope as the substance to fill it.

Quinn has his moment of riveting intensity as well, but not in an address to Penelope. It is a harangue on political exigency and the folly of human kindness. The first principle of survival in the jungle of human affairs is kill or be killed: do unto others before they can do you. And Peyankov drives it home with stone-cold conviction.

But Quinn’s turn at wooing Penelope degrades Walsh’s smart, bitter comedy into lame farce. The playwright falls back on a visual quick-change technique that stops the breath in “The Walworth Farce” and “New Electric Ballroom” but now only feels arbitrary, distracting and stale. Similarly, for all the earnest sentiment Ian Barford brings to it, Burns’ late speech on the triumph of human goodness wants the authentic ring of Quinn’s on self-interestedness.

By the end, one is quite ready for Odysseus to get home and dispatch them all. Which reminds me that I’ve said nothing about the barbecue grill. It’s a fine, big, gas-fired grill that simply showed up one day there in the empty pool. Nobody knows where it came from, but guys being guys, they loved it. Then the blasted thing stopped working. Now this wonderful gift has become a point of vexation, nothing at all like it seemed. Rather like the Trojan Horse, a killer idea cooked up by the owner of this very pool.

There’s many a belly laugh in Walsh’s naked truths about men, or is it truths about naked men? Steppenwolf’s game foursome hurl their mutual barbs with the deftness and precision of practiced laugh-masters and straight men. If the sum doesn’t quite equal the parts, it’s worth it just to watch the Four Montys.

Photo captions and credit: Home page and top: Yasen Peyankov as Quinn, Scott Jaeck as Dunne and Tracy Letts as Fitz are among the last suitors standing in Edna Walsh’s “Penelope.” At right, top to bottom: Tracy Letts as Fitz takes refuge in his books. Logan Vaughn as Penelope is the suitors veiled and distant prize. Rotund Dunne surveys the iron-pumping Quinn.  At bottom, left to right: Fitz, Quinn, Dunne and Ian Barford as Burns, the youngest suitor. (Photos by Michael Brosilow) 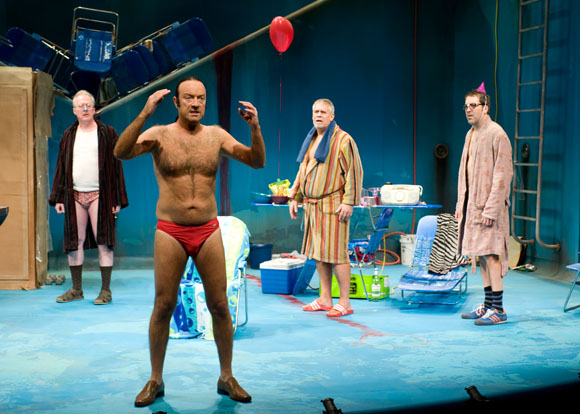