One of the quiet beauties of Chicago’s theater season has sprung up in “Burning Bluebeard,” the Neo-Futurists’ rueful, physically lyrical riff on the Iroquois Theatre fire that took more than 600 lives on Dec. 30, 1903. 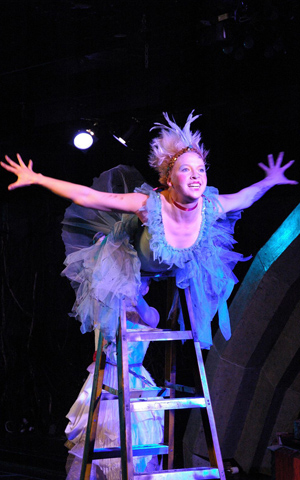 This imaginative, wry and devastating play, created by company member Jay Torrence, reflects on the tragedy through a rhetorical question raised by the troupe of actors who were performing in the show or working backstage on that horrific day: If we could do it over, might the ending work out differently and all those people, the hundreds in that holiday crowd of mostly women and children, not die?

The posh Iroquois, open only a month in December 1903 on Randolph Street where the Oriental Theatre now stands, was advertised as “absolutely fireproof.” On the day of the disaster, a holiday crowd well over capacity squeezed in for a performance of the popular musical “Mr. Bluebeard,” a silly take-off on the grim tale of Duke Bluebeard and his penchant for killing his wives. Starring was the Chicago-reared comedian Eddie Foy. He survived the fire, as did all but one of the company.

“Burning Bluebeard” imagines the guilt and heartbreak of the actors. The fire wasn’t their fault, but it was their show – and the outcome was hideous beyond comprehension. The blaze started in faulty wiring when romantic lighting was brought up for a moonlit number. In the fly space above the stage hung dozens of heavily painted scenic drops. Sparks from the wiring ignited the drops. The fire whooshed into a blaze, then exploded into an inferno. Many in the audience were incinerated in their seats.

The Neo-Futurist playbill refers to Jay Torrence simply as the creator of “Burning Bluebeard,” but any theater buff would readily call him the playwright. Radical as Torrence’s concept may be – a clutch of clowns reliving that awful event through a series of free-wheeling vignettes – it is devised with great concision, fluency and wit. The play’s disarming blend of energy, charm and pathos never flags through a single sweep of an hour and 40 minutes.

The six actors are a bedraggled troupe of clowns, their costumes singed and smudged. Most of them are accomplished tumblers, denizens of the absurd world of the stage where nothing is real and every scene and line resonates with the comedy we all live. They are sensitive souls, these poor creatures seemingly trapped in a memory loop of the Iroquois fire. Though they speak, their eloquent faces and elaborate physicality – sometimes slapstick, sometimes airily graceful — lend their words much deeper levels of meaning. 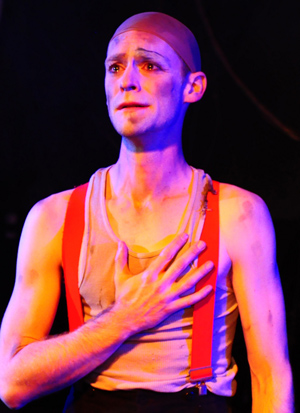 Actually, two plays are going on at once: the hellish recycling of the fire and the macabre story of Bluebeard. Dark fare, it is dimly lit and interwoven with a deft touch by director Halena Kays. Playwright and director draw us into an existential hell, not unlike Sartre’s “No Exit” or, for that matter, Enda Walsh’s “New Electric Ballroom.” These gentle characters don’t want to be there but they cannot leave. They can’t forget, nor can they alter what has been or will be.

Their plight, like their wistful re-enactment, is profoundly affecting. In this gloomy setting, the clown-players manage to be radiant. Their story is shattering, made bearable through stark comedy — at least up to a point. Toward the play’s end, when Eddie Foy (Ryan Walters) begins his graphic account of the fire, all the metaphorical clowning ceases, and with it Dean Evans’ infectiously droll asides as the most sober of clowns. You can read the pain of Walters’ narrative in his face, in the tension of his body: Here is what actually happened, what we witnessed and cannot banish from memory, but would change if only we could.

Watching and listening to Walters, you believe this catastrophe surely defied the power of words to describe it. Then an agonizingly extended epilogue removes all doubt.  Even the words burn.