Review: “Ann,” written and performed by Holland Taylor. Presented by Broadway in Chicago at Bank of America Theatre through Dec. 4.  ****

According to Wikipedia, Dorothy Ann Willis Richards was “an American politician from Texas.” That’s like saying the B-2 stealth bomber is a large airplane that’s hard to see at night. As the feisty, plain-spoken Richards might have declared: “You ain’t said the half of it, brother.”

Ann Richards (1933-2006) is the fascinating and endearing subject of “Ann,” a one-woman show written and performed by film and television star Holland Taylor.

A Texas-born mother of four, who became a public servant only after long and contented service to her family, Richards rocketed to national attention with her keynote address at the 1988 Democratic National Convention. She went on to serve as governor of Texas from 1991-95 before losing in her re-election bid to George W. Bush. 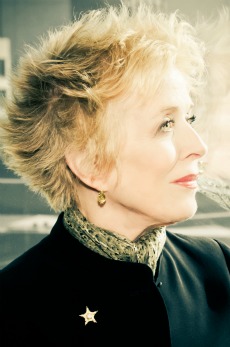 Taylor’s ambitious tribute is wonderfully entertaining, wry and affectionate. It’s also thoroughly researched – the playwright says she spent four years developing the show – and subtly evocative of a woman of her time whose ultimate calling took her by surprise.

Apart from its imaginary ending, in which the deceased woman reflects appreciatively on generous remembrances by her friends and colleagues, “Ann” draws from Richards’ public record and hours of conversations between the playwright and Richards’ family members and associates. But in no way, not for a moment, is this some sort of recap of a political career. It’s the vivid, bristling, earthy, often hilarious story of one extraordinary woman’s passionate engagement with life.

The show’s springboard is Richards’ fictional appearance at a small college in central Texas to give the commencement address. In her opening remarks, the now-former governor compares the circumstances of her own youth with the world that awaits the “pink-cheeked” graduates fiddling with their tassels before her. In a sequence of light-hearted anecdotes, Richards recalls her upbringing by a stern mother who never knew an hour’s rest and a likewise hard-working but indulgent father who loved dirty jokes.

Thus Richards – in a smart white dress suit set off by her famously piled and wispy white hair – takes us back through her child-rearing and happy devotion to her husband, a lawyer who specialized in civil rights cases. The marriage would end when the nest emptied, but not before Richards’ husband urged her toward her first bid for office, that of county commission – the first of her many successful campaigns along an upward political path.

Then came the turning point: the 1988 Democratic keynote, whereupon Richards’ thrilled supporters cast a wondering eye toward the Texas statehouse. With the governorship, Richards’ life changed, and so does playwright Taylor’s set, which now becomes elaborated into the harried seat of power. Here the stand-up narrative also ends and we find ourselves eavesdropping on a typically crazy day in the life of a decider.

By this time, of course, we’ve come to know Richards’ personality, her down-home way of talking, her life history as one long enthusiastic embrace and, indirectly, some of her pals – such as the sitting president, Bill Clinton, a former governor of Arkansas. Through one of her several phone chats with Clinton, we actually pick up some useful information: “If you get married in Arkansas, but get a divorce in Texas,” she asks her old friend….Well, what followed seemed to strike a chord with the audience.

The episode in the governor’s office is the centerpiece of “Ann.” It is quite extended, rambling, funny and altogether credible in its parade of concerns, foibles and distractions great and small. Here Taylor adds a set-up device: a secretary whose voice we hear via intercom from the next room. By now, we unquestioningly see Taylor as Richards. Her performance, like her script, is utterly unself-conscious in its impatience, vexation, saltiness and mental division between the exigencies of re-election and the motivations of noble purpose.

Taylor’s Ann Richards turns out to be as imperfect and vulnerable, loving and hopeful as the rest of us. What makes her special is a rare combination of vision, savvy and drive. And an unquenchable lust for life.