Michael Stegall, who looks and sounds every inch a ropin’ cowboy in the Raven Theatre production of William Inge’s “Bus Stop,” grew up in the West. No surprise there. 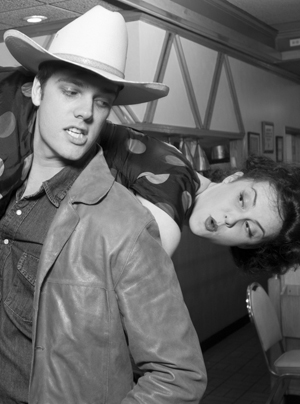 But wait a minute.  Not that West. The 6-foot-3, 23-year-old actor hails from Palm Springs, CA, where the buffalo do not roam. So how did this “city boy” (his term), who’s not even a western movie fan, crawl so naturally into the skin of Bo Decker, the rambunctious, untamed cowpoke hell bent on lassoing a pretty little lady in “Bus Stop”?

“Me and Bo sort of had a chemistry,” says Stegall, in his first major Chicago theater role since getting his bachelor’s degree in acting at Columbia College last year. “The first time I read the play, I had this instinct about the way Bo moved, the way he responded to his world. But little things also helped. The boots I wear came one size too large, and that affects the way I walk.”

But there’s a lot more than floppy boots to Stegall’s headstrong, intimidating wrangler. This Bo takes the stage by storm. He isn’t just swaggering and obnoxious; he’s dangerous, genuinely scary.

“At one of the talk-backs, a girl said, ‘You were really an (annoying cowboy),’” Stegall reports with a laugh. “She said this very enjoyable little play was going on and then I came out and made her really uncomfortable. Well, you should be uncomfortable. Bo is a holy terror.”

Yet if so young an actor can play against type, that appears to be the case with Stegall as a roughneck.

“I’m a really polite person,” he said. “That’s just the way I was raised. In the play, there’s a scene where everybody’s telling Bo to shut the (café) door. Actually, the director had to remind me to leave it open. Then Bo’s grabbing Cherie (the object of his passion, played by Jen Short) and throwing her around, and fighting with the sheriff. That isn’t me, but it is Bo. And that’s my comfort zone. I learned acting from a really physical standpoint. I feel safer on the stage than anywhere else.”

In fact, Stegall is the show’s fight captain. The one real knock-down-drag-out happens mostly out of view, but there’s a lot of rough stuff on stage and Stegall assisted choreographer David Woolley with that, too.

“I’ve had a blast doing the stage combat,” he said. “It’s like you really try and kill somebody. It has to be real. It’s why you go see a horror movie, to experience the worst imaginable part of life without actually experiencing it.” 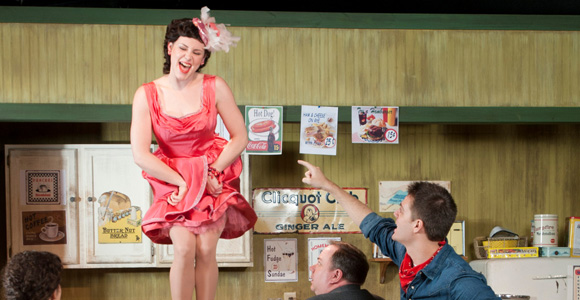 And playing an ornery cuss like Bo – never mind that he mellows some in the end – is just another form of the same theatrical illusion, says Stegall. “A character, any character, exists only in the audience’s imagination,” he said. “So it doesn’t matter if it’s the worst character in the world, you should enjoy playing him because your character is always right. He is who he is.”

Stegall says he worked his way into Bo mainly through a close reading of Inge’s text. “I took a good look at him from the ground up. He spends all day riding horses. He’s a proud guy who holds his chest out. I didn’t do much research on the cowboy aspect of it. I didn’t want to shove the cowboy down the audience’s throat. That would have been a train wreck.”

Instead, Stegall engaged Bo as a blusterer who has some personal issues. He’s an orphan whose only true companion has been his pal and father-figure Virgil (Mark Pracht). He’s a strong lad of 21 whose willfulness and strength have always worked in subduing horses. Then Bo finds out the hard way that he can’t just rope a woman.

“My favorite part of the show is Act II, when he’s really trying to get her to like him,” Stegall said. “It’s difficult to imagine that someone you care about doesn’t also feel that way about you. I was in Bo’s shoes when I was 17. He’s left with the truth, and it’s very hard.”

If Bo is appears to be a natural fit for Stegall, he credits “a wonderful group of people around me,” and admits to grappling with the most fundamental challenge:

So what has this adept, yet still very young actor learned through the eyes of hard-headed Bo? 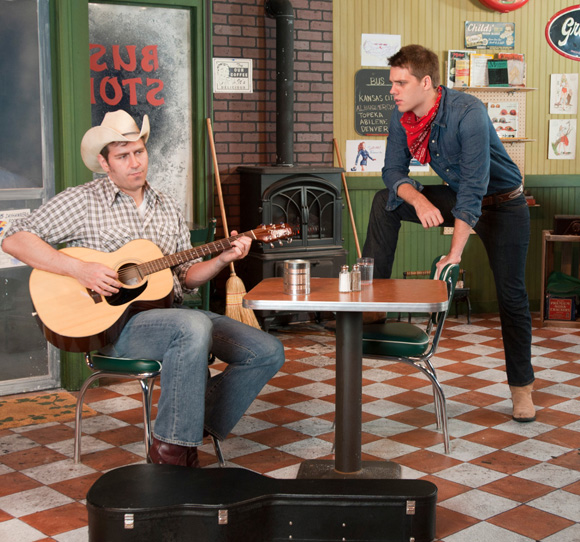