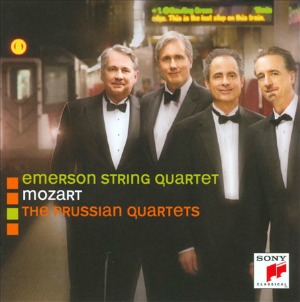 The last three string quartets Mozart composed, in 1789 just two years before his death, utterly belie the desperate financial straits into which he had fallen. These sunny, and technically brilliant, performances reveal Mozart at the zenith of his creative powers and, one would surmise, delighting in the challenge of writing quartets that provide an exceptional showcase for the cello. The three works were part of a commission from the Prussian King Friedrich Wilhelm II, himself an amateur cellist. At the king’s court,  Mozart had discovered a resident string quartet of great accomplishment. But if Mozart’s letters are to be taken at face value, he regarded as “laborious” the task of spotlighting the cello while maintaining proper overall balance among the four voices. That may just be the impecunious composer venting, for the invention, grace and sheer exuberance of all three works add up to generous portions of charm and intellectual fascination. From the D major Quartet’s lighter-than-air opening movement to the Larghetto’s songful duet for cello and violin in the B-flat Quartet and on to the piquant, constantly surprising variations of the F major Quartet’s slow movement, the Emerson charges these works with irresistible buoyancy and panache. It’s lustrous ensemble playing and fine, bravura Mozart. – Lawrence B. Johnson