Review:  “Les contes d’Hoffmann” (The Tales of Hoffmann) by Jacques Offenbach at the Lyric Opera of Chicago through Oct. 29. ****

With Jacques Offenbach’s “Les contes d’Hoffmann” (The Tales of Hoffmann),  the Lyric Opera of Chicago has opened its 2011-12 season with a witty toast to love, heartbreak and the pursuit of art.

The visual centerpiece is one you won’t forget — an extravagant fan-shaped window of  crystal and iron that evokes London’s Crystal Palace and Paris’ Eiffel Tower.

Alive with energy and permeated with light,  bursting with optimism and synonymous with the cutting edge of art, these buoyant 19th century structures were the technological breakthroughs of Offenbach’s day.  This production by French director Nicolas Joel neatly captures a moment in time, perhaps much like our own, when the world seemed on the thrilling brink of a new era.

Or at a precipice looking into abyss, to hear the stuporous poet Hoffmann tell it.  He spins his tale of unlucky love one remarkable woman at a time as the window becomes the stained-glass of a cathedral, the feminine filagree of lace, the cobalt shimmer of night at water’s edge, even the molten fire of damnation as it reflects Hoffmann’s nightmarish fantasy.  Like music itself, the light functions in a realm beyond words, beautiful, efficient and impressive. 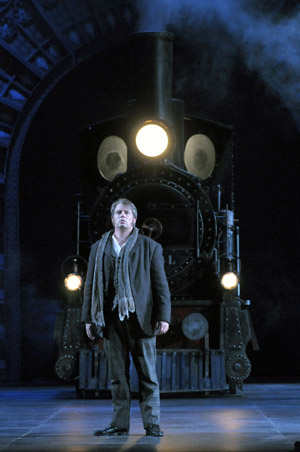 Tenor Matthew Polenzani is Hoffmann. I would have said he was French, but I would have been wrong. He was born in Wilmette and raised at least in part by the Lyric Opera’s Ryan Center training program.  He is an excellent fit as the poet who trusts his impressionable heart and takes a trouncing for it.  I’m sure the French would be happy to adopt him.

Polenzani had sufficient heft when he needed it, but also a sweet precision in expression,  elegance of technique and a ravishing spin at the high end that he was probably born with.  Even in that huge auditorium, Polenzani brought endearing intimacy to Hoffmann’s most famous  expressions of heartfelt love — with Antonia in “C’est une chanson d’amour” and to Giulietta in “O Dieu! De quelle ivresse.”

Hoffmann is always in love with somebody, even if not for long, and this pin-balling of his heart is a source of much of the opera’s wit.  As our hero tells it, he was first smitten by Olympia, who was to him a living doll. Actually she was a mechanical doll, a buzz-worthy novelty of this machinery-fixated age, and she stars in one of the opera’s great set pieces, “Les oiseaux dans la charmille.”  The opening night crowd loved it; you could hear intermission chatter everywhere about  coloratura soprano Anna Christy’s totally believable mechanized antics while pinging notes in the stratosphere and becoming — dare one say this? — self-aware.

Olympia’s appearance in the Lyric production is set up by a bit of stage mirth in the form of a wondrous  steam locomotive that floats into view to the tune of an imperial waltz.  An excellent reminder that although a mechanized doll wouldn’t raise eyebrows in today’s nano world,  it would have back when nobody knew about spaceships or the iPhone 5.

The other women also were well-matched to the story Hoffmann unfolds.  Erin Wall was disarming as the frail singer Antonia, delivering some of the best singing of the night in her lovely aria of longing, “Elle a fu, la tourterelle,” before building her tormented character into fatal frenzy.  In her Lyric Opera debut, the beautiful Alyson Cambridge looked  confident and sexy as the courtesan Giulietta in the famous Barcarolle scene, although the vocal part is daunting and somewhat thankless.  (She’ll be back later in the season, as Julie in “Show Boat,” which may serve as the better showcase.)

And mezzo-soprano Emily Fons, in the trouser role of Nicklausse — Hoffmann’s faithful friend and muse — won the audience’s heart with the so-called Violin Aria, Nicklausse’s deeply felt and clear-headed  admonition to the poet, which we know will go unheeded. 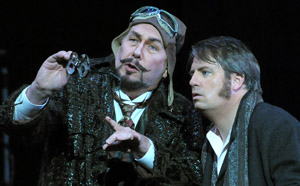 The hallucinating Hoffmann suspects that a single nemesis is foiling all his attempts at love. Veteran bass-baritone James Morris, amusing as all four of the story’s nefarious characters, lurked and slithered with a gusto that suggested Hoffmann was right.  His vengeful optician Coppelius was a hoot, his Dr. Miracle forcefully scary, and in his “diamond aria” Dapertutto was a cool customer who knew how to dangle a carat.

The tenor Rodell Rosel could take a lesson in understatement from Morris in his character roles;  Rosel’s four servants were perhaps too much alike and too much like Harpo Marx in their over-determined perpetual motion.  That said, Rosel is a natural comedian, and his deadpan schtick as a  near-deaf servant brought whole-hearted guffaws.  Of the many other fine performers in the supporting cast, I would single out the resourceful tenor David Cangelosi as the “living dol”l inventor Spalanzani;  the distinctive bass-baritone Christian Van Horn as Antonia’s over-protective father Crespel; and Jamie Barton as Antonia’s dead mother, her disembodied voice pouring forth from a luxurious source.

Any production of “Les contes d’Hoffmann” in recent times is going to be controversial.  Offenbach died in 1880 before he could hear it performed, indeed before finishing the orchestration. Since he was well known for continuing to revise works long after their premieres, a consensus emerged that no matter what could be found on paper, Offenbach’s own practice constituted license to maneuver.  Out of the disarray, a number of performing versions developed, some of which gained traction and became historical traditions in their own right.  Meanwhile, scholars have found new material that disputes those traditions, but at this time most singers and opera companies, who tend to become set in their ways, have shied away from tackling these issues in a fundamentally new version.

This production,  substantially based on the early 20th-century version by the Parisian publisher Choudens, is for me a favorite.  It is well seasoned, having been first presented in 2006 for the Teatro Real in Madrid and subsequently taken to Tel Aviv, Toulouse and Turin, yet it still feels fresh. The superb conductor Emmanuel Villaume applies a light touch and firm command; he was part of the original team.

The sets are by Ezio Frigerio, costumes by Franca Squarciapino and lighting by Vinicio Cheli — all veterans and longtime Joel collaborators whose “Hoffmann” concepts have been long in incubation.  Chicagoan Jason Brown is now on lights, to magical effect, and Stéphane Roche (another close Noel associate) has assumed stage direction here as he has done several times on the Continent.

Photo captions and credits: Home page: Hoffmann is bewitched by Olympia (soprano Anna Christy) and doesn’t seem to notice she’s not real. Top:  A besotted Hoffmann (tenor Matthew Polenzani) loses himself in the reverie of three unlucky loves.  Middle:  The guests are gathered at the home of Spalanzani to witness his latest creation, a mechanical doll.  Bottom: The eyeglass master Coppélius (bass-baritone James Morris) will outwit Hoffmann.  (All photos by Dan Rest/Lyric Opera of Chicago.)