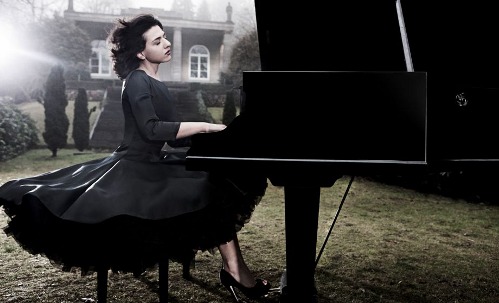 Mark the name of pianist Khatia Buniatishvili. Or better yet, listen to her debut CD, a spectacular Liszt recital released this summer by Sony Classics. This 24-year-old native of Tbilisi, Georgia, made a rather quiet U.S. debut at Carnegie Hall’s intimate Zankel Hall in 2008, but as she becomes better known here heads are going to turn and that meandering last name will suddenly roll off American tongues.

Buniatishvili, who has won high praise from the likes of pianist Martha Argerich and violinist Gidon Kremer, first sat at the piano – presumbly on a thick phone book – at age 3 and gave her first performance as soloist with an orchestra at 6. But she disavows the child prodigy label, insisting that virtuosity in itself holds no charm for her. She views the piano as a symbol of musical solitude, “the blackest instrument.”

While she continues to perform all over Europe, her exposure in the U.S. has been scant, and this season is typical: a few concerts in San Francisco, Minneapolis and Indianapolis in late January. Then right back to the European circuit for the remainder of the season. 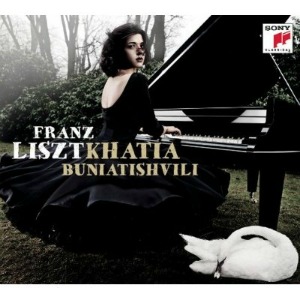 Yet if her Liszt disc for Sony is any indication, Buniatishvili is special, a throwback to the romantic virtuoso, flamboyant and technically unstoppable. The centerpiece of the CD is Liszt’s formidable Sonata, which becomes in Buniatishvili’s hands almost a poetic credo, at once blazing and intimate, sweeping and refined.

The program begins with a feathery turn through “Liebestraum” and includes a torrid “Mephisto Waltz.” But the most intriguing item may be her free-wheeling performance of Liszt’s pianistic recasting of Bach’s Prelude and Fugue in A minor, BWV 543. Buniatishvili brings such clarity to the counterpoint and such impulse to the spinning lines that one is left only to wish that her next CD might be, as it were, the real thing: Bach.

Packaged with the Liszt CD is a DVD with a short video conceived by Buniatishvili under the title “A Faustian Dream: A Short Film Concept.” It’s a sort of goth music video in which the pianist accompanies herself in the Liszt Sonata during quick-cut outdoor images of her variously costumed to suggest Faust, Marguerite and Mephistopheles. It’s actually quite fetching, in its darkly playful, slightly androgynous way.  She also narrates the video in English, one of five languages in which she is fluent.