“Madagascar,” with music and lyrics by George Noriega and Joel Someillan, book by Kevin Del Aguila; at Chicago Shakespeare Theater through Aug. 27. ★★★★

There is currently a zoo on Navy Pier, and a jungle too, thanks to the Chicago Shakespeare Theater’s production of “Madagascar: A Musical Adventure.”

This is not one of those shows that are also fun for kids. “Madagascar” exists only for kids. There’s a reason the show times are all matinees, with no evening performances: Over half of the patrons at the 11 a.m. show on July 21 were surely tucked into bed by 8 p.m. If you have children in your life, from toddler to 8 or so, do bring them to this colorful, toe-tapping animal extravaganza. And that’s not just my opinion. The lack of squirming and whining in the theater indicated a mesmerized target audience. Your kids are probably already familiar with Marty the stir-crazy Zebra, Alex the self-absorbed Lion, Gloria the female Hippo (more on this below), and Melman the hypochondriac giraffe. They’re denizens of the Central Park Zoo until an attempted escape (to Connecticut) gets them, rather mysteriously, exiled to Madagascar.

These friendly beasts debuted in the 2005 DreamWorks movie “Madagascar” (with two sequels so far), whose angular drawings redefined the potential of computer animation for children’s feature films. And then there are the four penguins, a Mission Impossible parody gang who developed such a fan base that they earned their own TV spinoff series.

Kevin Del Aguila provided a slimmed-down book for the play, simplifying the movie plot enough to allow room for songs and still come in at 70 minutes. Because the movie relies mainly on pre-existing pop tunes, George Noriega and Joel Someillan, who share the music and lyrics credit, were working from scratch. Their catchy songs, with influence from Broadway, Latin and Caribbean music, and hip hop, were given energetic accompaniment by a small group of live instrumentalists under Jermaine Hill’s musical direction. (This show, which premiered in 2016, is not to be confused with “Madagascar Live!,” based on the same movie, which toured for only a few months in the U.S. in 2011, but had longer life in Europe and Asia.) 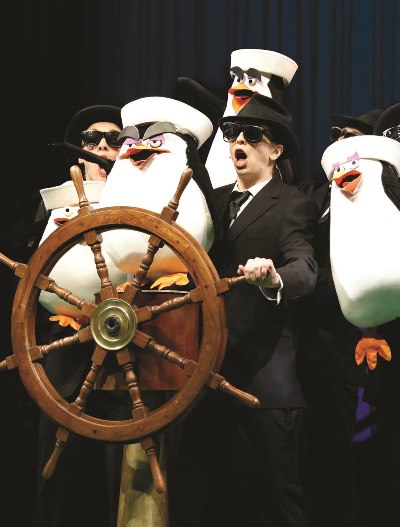 Without question, the stars of this production are the costumes by Jesus Perez and puppets by Sarah Ross. The creative team deployed a range of clever problem-solving techniques to realize the surreal drawings from the film. The four main characters have body costumes that move easily (except Gloria, who wears a big gray bell with tutu fringe to indicate her hippo-ness). The penguins are torso-sized puppets with moving beaks and wings, wielded by actors dressed, of course, as spies in black suits, hats and shades.

The representations of animals native to Madagascar were even more spectacular. The tribe of lemurs – led by Aaron Holland, showing as much comic as vocal skill in the role of King Julien – who welcome the New Yorkers are full-body puppets, attached at the actors’ ankles and hands (a squeeze of one hand operated the mouth). And their arch-enemies, the Foosa (a hyena-type animal more commonly called a fossa), are hunched-over actors in thick pelts with giant, glowing eyes. The young audience seemed appropriately alarmed by them.

Chicago Shakespeare veteran Rachel Rockwell directed and choreographed the 14-person cast in simple patterns, and on a bare stage brightly lit by Jesse Klug. Occasionally, isolated sets by Scott Davis slid or rose into view to clarify the place (most ingeniously the crates in which the main characters are shipped to the African island, which looked like wood until their interiors were lit, showing the hapless inmates). But mainly the scene changes were taken care of by Shawn Sagady’s colorful, Africa-inspired projections.

The cast was solid, especially the warm-voiced Gilbert Domally as Marty, the zebra who just wants to see the wild and find himself. Domally, in his black and white mohawk mane and face paint, was convincingly wistful. Stephen Schellhardt got a lot of laughs as the cowardly giraffe Melman, who is most afraid of missing his upcoming doctor’s appointments. I wished for a greater contrast when Jordan Brown, as Alex, goes from being a spoiled but affable pal to feeling real hunger and his natural instinct as predator for the first time; but then, that could have resulted in hundreds of crying kindergartners, so maybe he handled it just right.

And then there was Gloria the hippo. It’s no reflection on Lisa Estridge, who sang well and amused with her surprising agility in a hippo suit, but the character has no real purpose except to be the only major female role. This problem originated in the movie, and is perpetuated by Del Aguila’s book. Chicago Shakespeare cast women as three of the four penguins, but didn’t change their male names, and did the same with some of the lemur characters. That was not enough to fix the disappointingly male-centric story.

But the audience of wee ones didn’t seem concerned about that. The show is funny, fast-moving, and pretty to look at. And it’s a nice parable about friendship, to boot. As delightful entertainment for young kids, “Madagascar: A Musical Adventure” is a success. Or, as Gloria puts it, “We kicked some Foosa caboosa!”