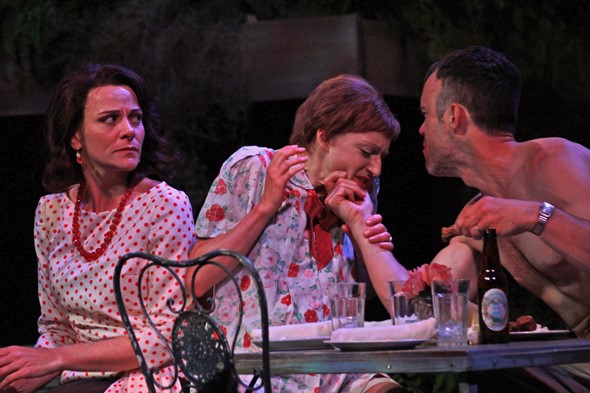 SPRING GREEN, Wis. – She is a fascinating character, indeed one of the iconic personas in all of theater, Blanche DuBois, the fallen Southern belle of Tennessee Williams’ “A Streetcar Named Desire.” The undying question is, Why? What’s so intriguing about this dame with the checkered past? Perhaps it’s her vulnerability, or her delusion, or her sheer refusal to go quietly into middle-aged oblivion. I think that’s the thing, her feisty pluck, that makes Tracy Michelle Arnold’s Blanche so compelling at American Players Theatre. 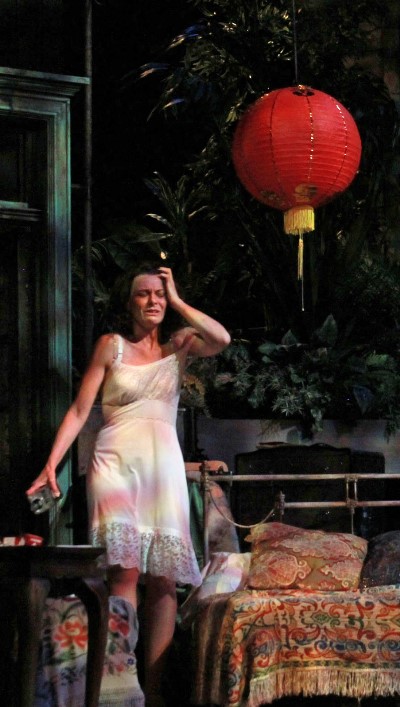 On a warm night, sitting in the open air of APT’s Up-the-Hill Theatre, you can practically feel the New Orleans heat in this production directed by the Chicago-based William Brown. And suddenly there she is, Blanche, dressed to the nines in a gray suit and matching pillbox hat, suitcase in hand.

This will not be your father’s “Streetcar,” but a more modern perspective on Williams’ timeless story of a woman clinging to her past and yet haunted by it. It’s the 1960s. But for a lost soul like Blanche, what’s a decade or three? She lives in a time-lapse, in a lost world of her tormented memory.

And now she stands before us, a daisy-fresh image of Jackie Kennedy, looking utterly bewildered. Can this back alley address be the residence of her sister Stella? A neighbor, the landlady, assures her that she’s in the right place and, since there’s no one home, lets her into the cramped, meager apartment Stella shares with her husband Stanley.

If Blanche is almost speechless, she manages to get out just enough of her gut reaction to put one in mind of Martha’s deathless opening line in Edward Albee’s “Who’s Afraid of Virginia Woolf”: “What a dump.” When the dismayed woman espies Stanley’s booze, and cops a nip, we get our first real glimpse into the many-layered Blanche. All this Arnold plays with a physicality that fills in every blank implied in Blanche’s minimal speech. It’s a commanding entrance.

And we’re instantly on her side. Her sister, with whom she grew up on the grand old estate of Belle Reve, has come to this? We’re looking at a proud woman who has an aristocratic sense of herself. Such is the strong and willful, albeit evasive and profoundly troubled, portrait of Blanche DeBois that Arnold paints in elegant, sure brushstrokes over the course of the play. It’s a transcendent performance, luminous and resilient, radiant and sad. 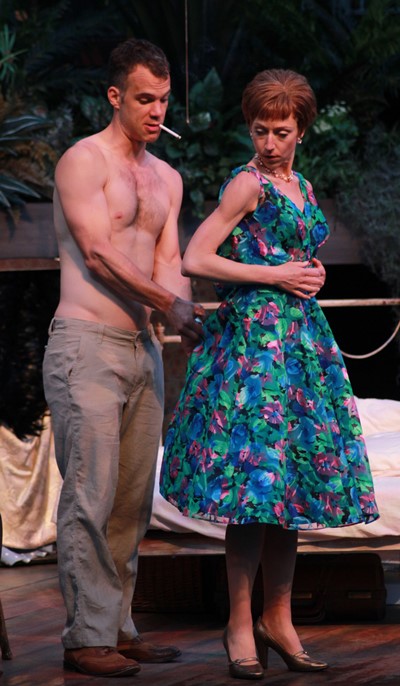 Enter Stanley Kowalski, not to the manner of Belle Reve born. Eric Parks’ lean, muscular Stanley is an expansive kind of guy – loud, crude, domineering. He’s also devoted to Stella (the soft-spoken and mediating Cristina Panfilio). True, Stanley’s given to smacking her one if she talks back to him, but Stella insists that’s not the real Stanley, the one with whom she’s about to have a baby. Or the one who weeps and cries out after her when she storms out of their apartment.

This is the earthy, not to say shabby, scene onto which Blanche arrives unannounced – well, unannounced to Stanley. Stella had been waiting for the right moment to tell him, but Blanche arrived before the moment did.

It’s fitting that APT’s production is set out of doors (and evocatively done by designer Kevin Depinet), for “Streetcar” essentially unfolds in a state of nature. Like elephant and lioness, Stanley and Blanche are natural enemies. While he bulls about, she circles and calculates. Blanche, who prefers half-light lest the wear of her years tell, arrives bearing secrets and lies, and Stanley quickly sees through her as if she were standing in the noonday sun. Arnold and Parks bring the bad blood between posturing visitor and skeptical host to a rolling boil.

To put the case plainly, Blanche’s life as she presents it to the Kowalskis, and to her new admirer Mitch (played with credulous innocence by Tim Gittings), is a crazy-quilt of falsehoods and fantasies. It’s when Stanley digs up all the goods on her that the last drop of compassion drains from his soul. Blanche’s past misdeeds have cost her sister, and therefore him, and now she’s playing his pal Mitch for a sucker. When Parks’ gritty anti-hero moves in for the kill, Arnold the terrified prey has nowhere to run to; and the bathroom is nowhere to hide. 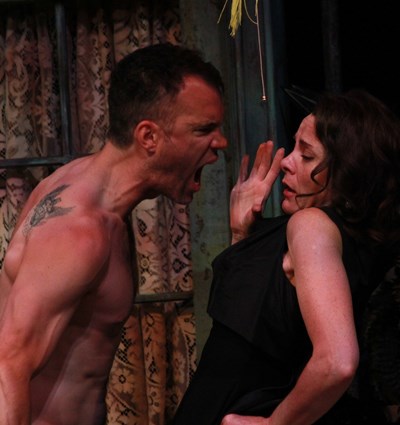 Blanche’s parting line, in the play’s final scene, is one of the most famous in drama, but here – as least in the performance I saw – it was fraught with ambiguity: As the gentleman from the asylum gently helps Blanche toward the door, she says (all together now!): “I have always depended on the kindness of strangers.” Typically, it’s a line laden with pathos. But in this instance, Blanche was looking directly at Stella as she spoke those words. A clear-sighted accusation of betrayal from a sister who has lost touch with reality? Possibly. Hard to know. Perhaps some part of Blanche the enigma still remains.