‘All Our Tragic’ at The Hypocrites: In a fresh spin on Greek tragedy, laughter and pause for dessert 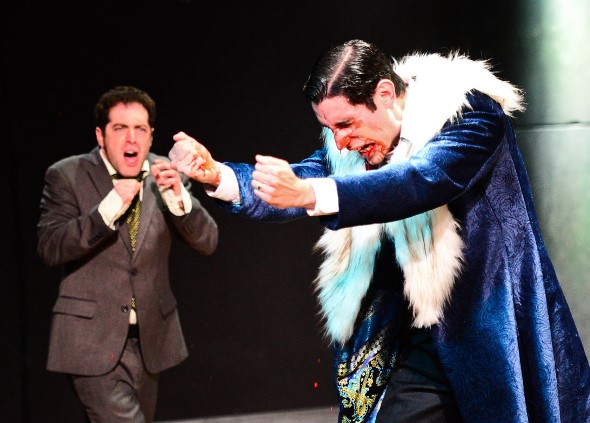 Review: “All Our Tragic,” adapted and directed by Sean Graney from the complete extant plays of Aeschylus, Sophocles and Euripides as a 12-hour cycle by The Hypocrites at The Den, extended through Aug. 16. ★★★★

Surely the apt term to invoke for The Hypocrites’ wry and campy 12-hour reconstitution of classical Greek drama, collectively titled with a dangling adjective as “All Our Tragic,” is Alpha to Omega. But any number of other fitting descriptors also rush to mind for this sweeping immersion: prodigious, clever, insightful, riveting.

A hit with audiences last season, “All Our Tragic,” adapted by Hypocrites artistic director Sean Graney as a retelling of the whole body of surviving Greek plays by Aeschylus, Sophocles and Euripides, has been reworked and remounted at the company’s spacious new digs in The Den Theatre, with one notable adjustment in presentation: You can no longer experience it in parts, a former option that apparently held little charm anyway. Now this show of shows runs only full-length, on Saturdays and Sundays from 11 a.m. to just past 10:30 p.m. – in eight acts with seven intermissions, including two extended intervals for meals (provided in the ticket price) and one in mid-evening for dessert! 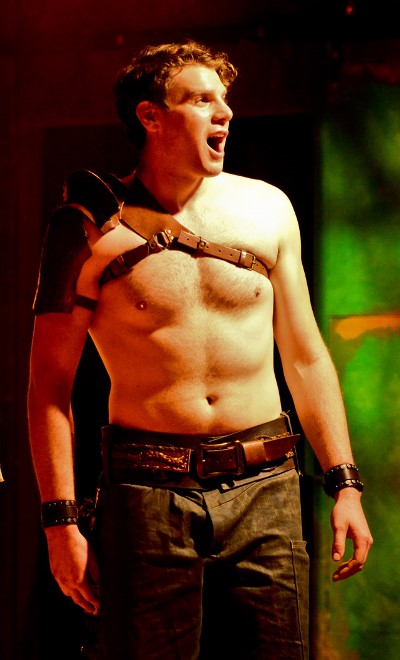 Honestly, I’m not sure which impressed me most, Graney’s bravura theatrical coup, the all-in commitment of a large cast of characters or the indefatigable enthusiasm of the remarkably youthful audience that came, stayed, watched in rapt silence and whooped their renewed engagement at onset of each act as if to proclaim, “We’re still here, let’s do it!”

This for a serious-minded narrative pastiche of of ancient Greek tragedy. Compositor Graney’s magical device is to turn the tragedies into a living comic book aimed at a modern sense of humor. Or rather, he sets up his narrative through broad comedy, catches the imagination, then flips the switch to something more like graphic novel and holds the viewer breathless in the face of human folly and its awful consequences.

From the exploits of over-determined hero Herakles (the strapping, exuberant, buffoonish Walter Briggs) to the piteous calamity of Oedipus (played with grand horror by John Taflan) to the suffering of Elektra (Lindsey Gavel as a muddied image of despair), this remarkable enterprise manages to convey the magnificence and cautionary irony of Greek tragedy in its totality without ever losing its edge or becoming superficial; nor does it lapse into the arcane or antiquarian. The greatness of ancient Greek tragedy lies in its perpetual modernism, and that enduring commentary on human imperfection bristles throughout “All Our Tragic.” 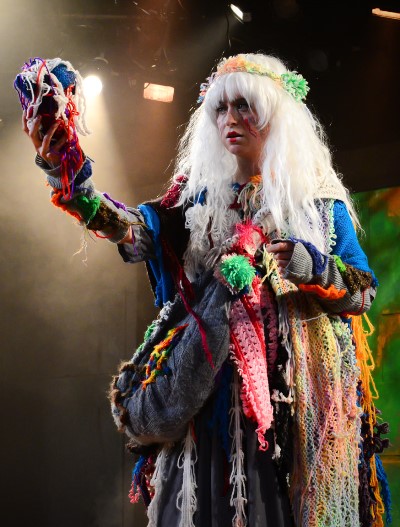 All the actors play multiple roles. Besides Herakles, Briggs portrays Agamemnon, commander in chief of the Greek forces that besiege Troy to retrieve Helen, wife of Agamemnon’s brother Menelaus. Helen was apparently stolen by the Trojan Paris (though he’s younger and more handsome than the middle-aged king, so there’s at least a shadow of doubt here).

Agamemnon is central to the whole cycle of Greek tragedy, and Briggs shows us a man in three guises, three humors, three radically differing situations. He is the accountable commander who must obey a divine fiat that he kill his own daughter Iphigenia (Gavel again) as a condition for moving his stalled ships onward from Aulis to Troy. He is the imperious and arrogant leader who humiliates his greatest warrior, Achilles (Breon Arzell Jackson), to assuage his own ego. He is the war-weary husband who returns home after long years seeking solace in a reunion with his wife Clytemnestra (Tien Doman) – though he undoes himself by blithely showing up with a war trophy, his “spear bride” Cassandra (Christine Stulik). To each of these personas, Briggs brings palpable singularity. 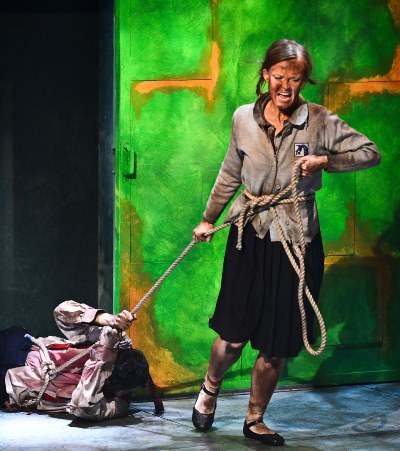 “All Our Tragic” abounds in imaginative, vibrant characterizations. Stulik doubles as Jocasta, mother and unwitting wife to Oedipus. Erin Barlow offers a devout, single-minded Antigone, whose conviction that moral law trumps the state leads to her death as she insists that both of her brothers, killed while fighting on opposite sides in an insurrection, receive proper burials.

Zeke Sulkes poses a fatally headstrong Creon, who will not accede to Antigone’s pleas. Gavel, arguably the MVP of this multitasking endeavor, cuts a brash figure as the blind seer Tiresias, droll and even cavalier in her certain knowledge of bad endings. Dana Omar’s dread Medea, bitter and fiercely willful, drives all comedy from the scene.

Indeed, comedy ultimately turns awkward. Having adroitly pulled the viewer in with antic farce, Graney steadily moves to a more serious place – only to revert back to the most untimely silliness in two late episodes: a digression into a bloody, ludicrous story about Helen (from Euripides) inserted into Aeschylus’ tragic Orestes triology, and then, even more unfortunately, in a farcical treatment of the cycle’s final play, “The Furies.” It is the story of Orestes’ flight from the avenging gods after he slaughters his mother Clytemnestra and her lover Aegisthus for their murder of Agamemnon, and it is the furthest thing from funny. 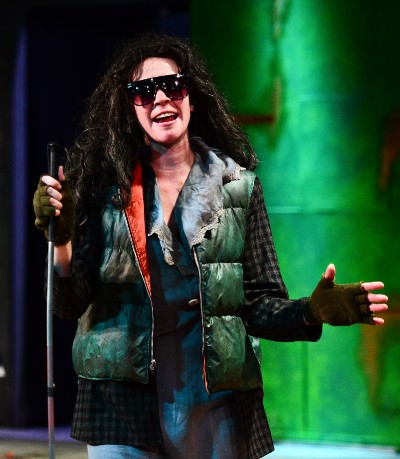 Yet Graney makes no bones about “All Our Tragic” being a work in progress, and the next staging – here’s one vote for an early revival – surely will work toward better integrating “The Furies” into the dramatic arc of the whole.

One lovely touch that surely will remain is a trio of female singer-instrumentalists who introduce each act and serve to bridge the narrow gap between the audience and set designer Tom Burch’s multilevel stage.

If the set is spare, Alison Siple’s costumes are not. These are weeds of antique splendor – gowns, crowns, armor and all. It’s really quite an amazing accomplishment, this marathon run from Thebes to Mycenae to the topless towers of Ilium, and back.