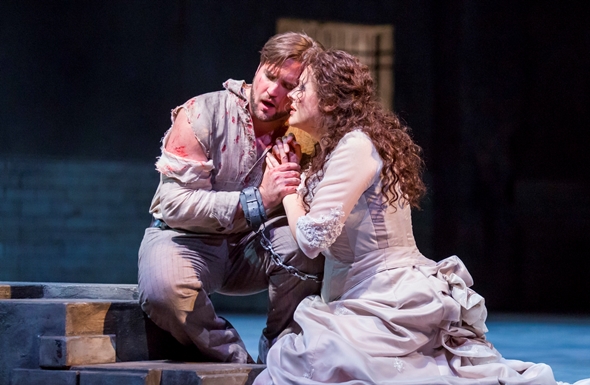 Review: “Tosca,” libretto by Giuseppe Giacosa and Luigi Illica with music by Giacomo Puccini, at the Lyric Opera of Chicago through Feb. 5; production resumes with new cast Feb. 27-March 14. ★★★★

Rekindling the fire, even the sense of surprise, in an opera as frequently mounted as Puccini’s “Tosca” is no small trick. But that is precisely the triumph of the new production that opened Jan. 24 at the Lyric Opera of Chicago – a mesmerizing night of music theater imaginatively staged, perceptively conducted and gloriously sung. 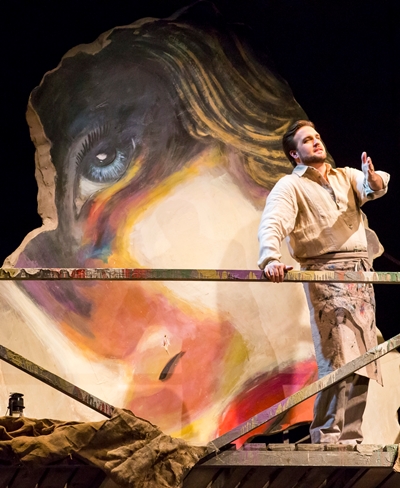 In her Lyric debut as Tosca, Russian soprano Tatiana Serjan displayed a voice of great beauty, flexibility and power, all marshalled to ringing drama effect. Serjan commanded the stage, tracing the arc of Tosca’s journey from capricious, jealous diva to a woman driven to desperate action in a frantic effort to save the life of her lover.

She was handsomely matched, in terms of chemistry and spirit as well as vocal prowess, by American tenor Brian Jagde, also making his Lyric debut, as the painter and resistance activist Cavaradossi. His huge, supple sound, in the first act’s “Recondita armonia” and the last act’s “E lucevan le stelle,” flashed through auditorium as if from no effort at all. From the early scene of Cavaradossi’s light-hearted sparring with the suspicious Tosca to their final moments before his execution, Jagde shaped the mature and satisfying figure of a man genuinely in love and politically committed. 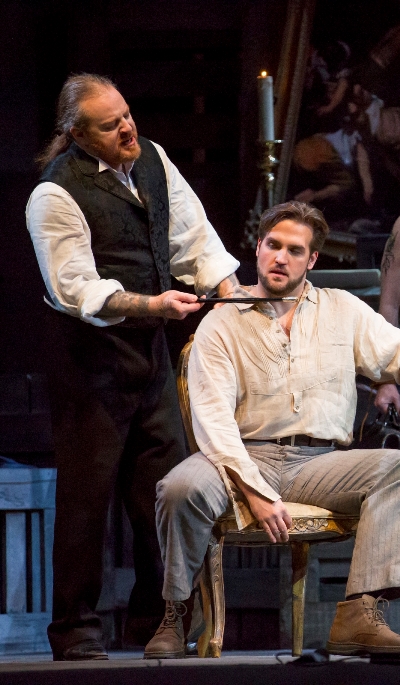 In Puccini’s original setting, it is 1800 and both painter and singer are caught up in Italy’s precarious political fortunes, as the military advance of Napoleon – at that time still the emblem of republic and freedom – promises to uproot the tyranny embodied in Rome’s corrupt, lustful and predatory commissioner of police, Scarpia.

For this new production, a joint venture with the Houston Opera, British director John Caird has pushed the story forward a hundred years, and the effects of war outside are seen in a great gap in the ceiling of the church where Cavaradossi is painting a likeness of Mary Magdalene. Or, more accurately in the present instance, he is restoring a picture of her – which has been rent into several large chunks, presumably by the same explosion that tore the hole in the roof.

Perhaps the fragmented Mary Magdalene bespeaks the fractures in an unstable society, or indeed foretells the destruction of the two beautiful lives before us. Ponderous as such symbolism might be, the huge, broken Mary Magdalene is nonetheless a striking image.

As indeed are designer Bunny Christie’s sets (and fin de siècle costumes) altogether. Formidable scaffolding surrounds Cavaradossi’s work on the painting – a fine perch for the cooing and teasing lovers and a threatening one for the hawk-eyed Scarpia. Likewise, Christie has created an arresting space for the interrogation and torture of Cavaradossi, and Scarpia’s conquest of Tosca: not the usual opulent office of a baron but rather an out-of-the-way storeroom piled with crates and statuary. It’s a cold, ominous place, one where a scream would die unheard. 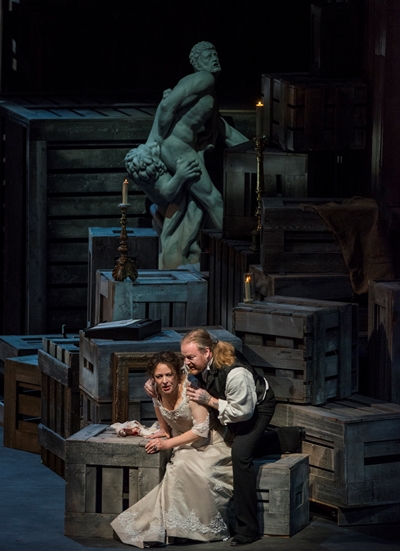 And it fits the forbidding aspect of bass-baritone Evgeny Nikitin’s Scarpia. You get the sense that Nikitin’s soulless, calculating, relentless character is one step removed from a common thug, a small-time gangster surrounded by his crude minions. It’s a scary prospect. If half of that impression derives from skillful acting, an equal component is vocal brilliance. Nikitin’s is a leonine voice – imposing and craftily applied.

That comfortless space provided a chilling backdrop for Scarpia’s brutal psychological beat-down of Tosca, and for Serjan’s electrifying turn through “Vissi d’arte,” a heart-stopping, vocally resplendent appeal to God from a devout believer who cannot fathom why she is being made to suffer.

Conveniently placed adjacent to abject Tosca was a small statute of the Holy Virgin, in Caird’s concept a sort of voiceless extra (usually animate) who keeps popping up throughout the opera.

Well, nearly voiceless. The director summons a child-size, living likeness of the Virgin to attend Tosca in each act. She appears, arms extended, as if to communicate…comfort, perhaps? But in the last act, which Puccini opens with the song of a nearby shepherd, the Virgin returns as Our Lady of the Sheep, transmuted – though sans change of attire – into that singing young guardian of flocks (Annie Wagner). Remarkably, she’s sitting on the castle parapet, adjacent to the gallows. (Is this another metaphor?) 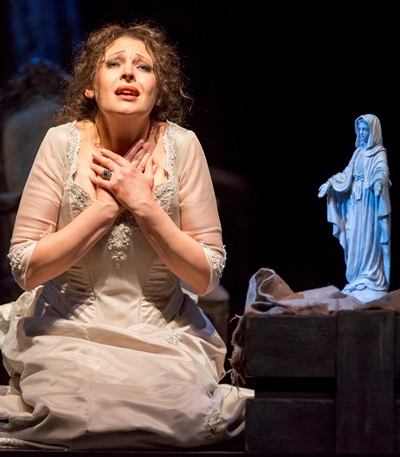 The whole materialized Virgin bit apart, Caird’s savvy direction keeps the dramatic line taut every step of the way. Up to the very last step, anyway, when Tosca, discovering that Scarpia has prevailed after all and standing poised on the parapet to end her life, surprises us with a knife trick familiar from another Puccini opera, “Madama Butterfly.”

There’s no trickery in conductor Dmitri Jurowski’s musical direction, just magical results. Jurowski consistently and fetchingly underscores the opera’s emotional surge, with deft shifts into sweet comedy and arching lyricism. Both the Lyric Opera Chorus, in the grand Te Deum that crowns Act I, and the Orchestra distinguish themselves with performances that bloom and soar.

I would be remiss if I didn’t mention the curtains that (metaphorically) cloak each act: First, a blood-splattered white drapery that’s pulled down by the fugitive Angelotti (Richard Ollarsaba), then a blood-soaked veil yanked away by Scarpia himself, and finally a black curtain with just a splash of red in the upper left – this one exorcised by the Virgin-cum-shepherd with the ever-outstretched arms. Like Prospero raising a storm.