Review: “Russian Transport” by Erika Sheffer, at Steppenwolf Theatre through May 11. ★★★★ 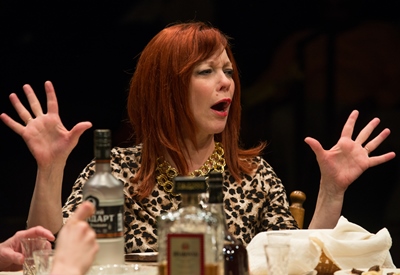 Like Miller’s “View,” Sheffer’s 2012 drama – her first play — is set in the Brooklyn underbelly where life is hardscrabble, you do whatever it takes to get by and you extend a hand to family coming behind you. But where “View” centers on the obsessive and destructive impulses of one troubled soul, “Russian Transport” serves up an overtly corrupt and dangerous man prepared to exploit, even subjugate his own kin in pursuit of his horrific business.

Sheffer’s taut, concise play begins as family comedy, broad and earthy, in a Russian-American household ramrodded by the willful Diana (Mariann Mayberry in a performance as outrageously brassy as her mop of red hair). She gets little more than humorous pushback from husband Misha (Alan Wilder), who runs a taxi service out of a back room. Wilder lends Misha has a distinct aspect of anonymity. 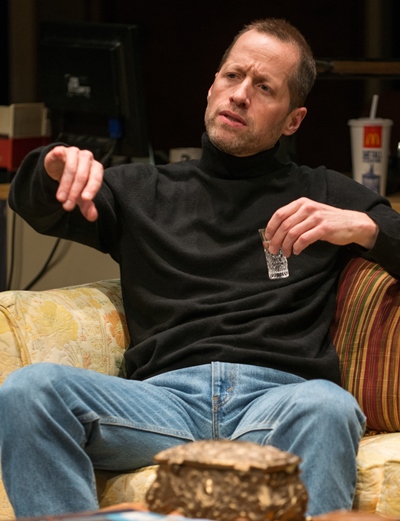 It is a spunky tribe, rounded out by two teenage children — Alex (Aaron Himelstein), who somehow makes more money than his job selling cell phones actually pays, and Mira (Melanie Neilan), who’s constantly at war with her mother and desperate to visit Italy. The parents are from Russia and often speak the mother tongue; the kids, thoroughly Americanized, understand the old language but stick to the parlance of their time and place.

Into this happily combative scene comes Diana’s brother Boris, a tall, strong, imposing man in his late thirties just arrived from the homeland. Diana, who hasn’t seen him in 20 years, says Boris always exuded virility. Even when he was young, she says, he could make a girl pregnant just by looking at her.

At first the new family addition is quiet and retiring, all gratitude and deference. But the truth is that Boris is into some serious – what’s the word? – stuff. You could call him the title character: the Russian transporter. And very soon he loops nephew Alex into his insidious game. 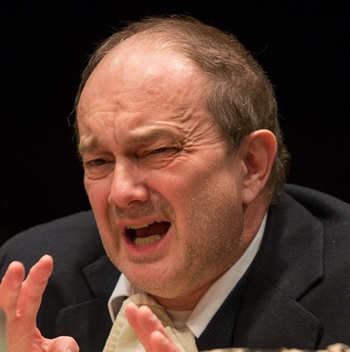 Tim Hopper is downright frightening as Boris. No one, not even his accommodating sister, is safe around him. No one dares cross him or fail him. When young Alex loses his stomach for the job and leaves Boris in the lurch, the importuned uncle recounts an anecdote about a relative of Alex’s, back in the motherland, who once made a similar judgment error. In graphic detail, Boris spells out the amending lesson that poor fellow got.

It is Alex who stands at the moral wall of this very dark tale, and in Aaron Himelstein’s nuanced portrait of a potential criminal as a young man, he seems the unlikeliest such bulwark. He gets sucked in, overwhelmed, sickened. But in Boris’ world, there is no door marked Exit. You’re in for the long haul. And yet, when you look in the rear-view mirror and see your own humanity looking back at you — what then?

Moving on a parallel plane is the play’s most intriguing character and Erika Sheffer’s most imaginative structural component – daughter Mira. Young, beautiful and restive, she wants so much to travel, see the world beyond Brooklyn. Nyet, her mother replies, singularly and just as loudly as Mira pleads. 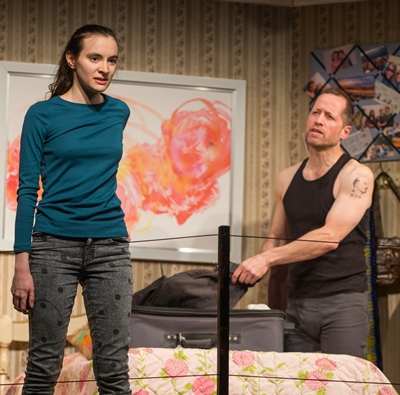 Melanie Neilan’s Mira is a girl of many faces, headstrong and narcissistic and naïve. But also determined to prevail, as eventually she appears to do. There’s mother Diana, in half light, helping the girl into a warm jacket and sending her off. When a bright-eyed kid wants something that badly, how long can a mom say no?

Director Yasen Peyankov paces the play with an impeccable sense of flow and rest, urgency and tension. The reunion of sister and brother at the family’s welcoming dinner is expansive in its cheer, disturbing in its edge. Boris’ transformation from mellow uncle to terrifying criminal progresses by deftly measured steps.

Set designer Joey Wade has provided a homey environment that brings the viewer directly into Sheffer’s harrowing narrative. And costumer Ana Kuzmanic hits the peak of cool with a suit for Boris that says crime pays, and well.