‘The How and the Why’ at TimeLine: Evolution thicker than blood as biologists clash

Review: “The How and the Why” by Sarah Treem, at TimeLine Theatre through April 6. ★★★

Rachel Hardeman is 28 years old and very bright, in fact a budding evolutionary biologist. She’s also a prickly pear who wears her attitude like a badge – or perhaps a protective cape. In Sarah Treem’s fascinating play “The How and the Why,” now on clinical display at TimeLine Theatre, Rachel collides with a blood relative who may owe her a good deal – some explaining for starters – and the thorns fly. 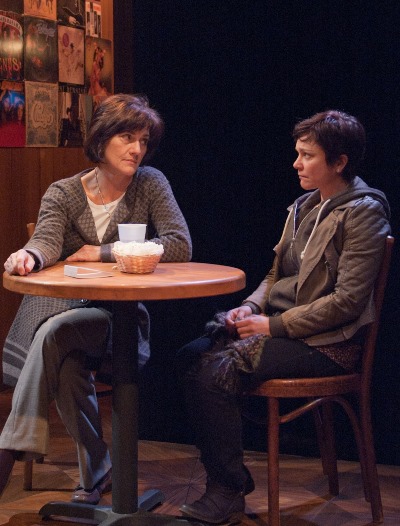 As chance would have it, Rachel’s relative (close or not so close is part of the argument) is a woman in her fifties who also belongs to that singular academic circle of evolutionary biologists. Zelda Kahn (Janet Ulrich Brooks) is where Rachel (Elizabeth Ledo) would like to be some day: established, well-known, tenured. The two women are meeting for the first time, and spunky Rachel has a bagful of rude (her native posture) surprises for famous Zelda.

Right here would be a good place to mention the historical peg of “The How and the Why.” The phrase itself is the rhetorical baseline for the whole endeavor of evolutionary biologists: How the components of a living organism function is one question; why those components do what they do is another – and the crux of evolutionary science.  Zelda’s celebrity in the field hangs on her (historical) theory known as “the grandma hypothesis,” which postulates that natural selection favored prehistoric women who outlived menopause to become useful care-givers to the offspring of perpetually pregnant women of child-bearing age.

Not every evolutionary biologist these days buys the grandma hypothesis, and in this play young Rachel suggests to Zelda that she’s perhaps coasting on the inertia of a debunked idea. But Rachel has a newfound theory of her own, also borrowed from historical evolutionary science: that menstruation is the body’s evolved method of purging the toxins introduced by sperm. 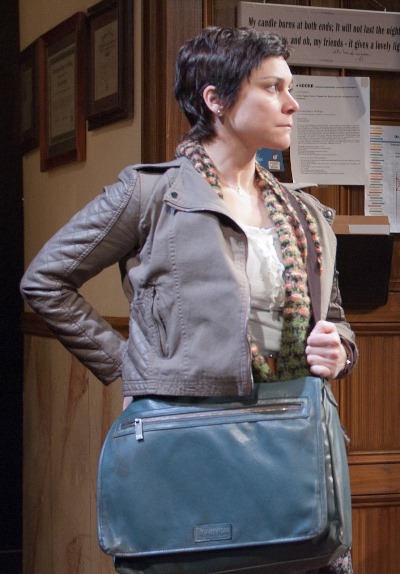 It’s when Rachel reveals her theory to Zelda that the real fireworks begin between this angry young biologist on the attack, bitter in her sense of estrangement, and the older, worldly-wise woman who gently parries while trying to keep the conversation on a calm and constructive course.

Elizabeth Ledo plays the wounded scientist with the intensity and killer instinct of a ninja warrior, slashing away at this maternal figure she views as her adversary. Yet time after time, Rachel thinks she’s landed a mortal blow only to find she’s missed her target completely. The young woman’s hurt is so deep and so old, her self-doubt ill-concealed by bravado, that she construes every kind word or gesture as condescension, dismissal or threat.

To the veteran scientist and weathered academic Zelda, Janet Ulrich Brooks brings a palpable aura of solidity mingled with exhaustion. This is a woman who has been around the block, who remembers what is was like to push through the academic door marked Men Only and who forced the scientific world to honor her achievement. 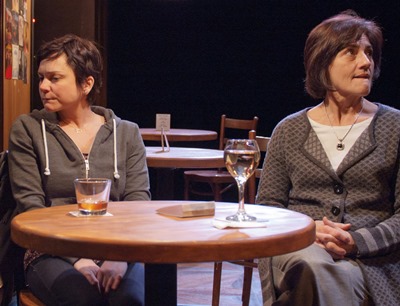 To Ledo’s impatient Rachel, the older biologist is just a time-stamped relic of the feminist movement, more hindrance than help in a changed world. But to Zelda’s experienced, analytical eye, Rachel’s harangue becomes more and more clearly a desperate cry. Among other things, this nouvelle feminist has a boyfriend, a fellow scientist, whose career is blossoming all too slowly. His ego and their relationship is suffering for it. Oddly, and sadly, she’s ready to deny her own brilliance in an effort to prop this guy up.

When Zelda maneuvers Rachel into seizing a chance to gain notice, by presenting a paper to a group of academics, the junior biologist isn’t ready for the scientists’ unsweetened response and accuses Zelda of setting her up to fail. 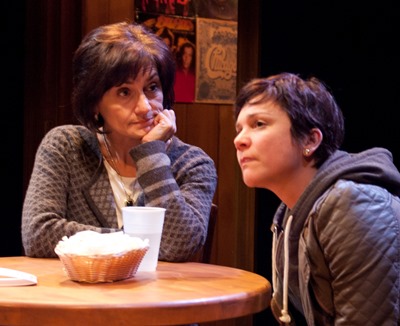 That’s how their relationship goes, frying pan to fire and back – and crackling with surprise turns, gotcha moments and revelations that come at an ever-faster clip. What precipitates, crystallizes, evolves from this emotional slugfest is a kind of formative understanding – something that might one day stand up on its hind legs and show the face of love.

Director Keira Fromm keeps these sparring partners bobbing and weaving – with Rachel occasionally throwing a fast combination to the head – on two expressive sets devised by Collette Pollard. Rachel the newbie enters the academic citadel that is Zelda’s office; later, when the two scientists meet again, it’s on leveled ground, a bar where you can get anything you want to eat as long as it’s popcorn.

A final shout-out to costume designer Alison Siple, who should get a special award for Rachel’s devotedly unattractive getup. Then again, a nice outfit might elicit a thoughtless compliment from Zelda. What do you mean, pretty?