In conductor Susanna Mälkki’s return to CSO, her place with the world’s elite is confirmed

In her debut with the Chicago Symphony Orchestra, in 2011, the Finnish conductor Susanna Mälkki was impressive. In her return, Oct. 19 at Orchestra Hall, she looked like the woman who could crack the exclusive men’s club of music directors with the world’s top orchestras.

At age 44, Mälkki rules from the podium through a distinctive amalgam of musical sensibility, intelligence and unflinching authority. Eschewing a baton, she conducts with her hands, body and, no doubt, eyes. She is animated, exact, fluent and aware.

As her current CSO program attests, Mälkki’s interpretive sympathies cut a wide swath and her skills as spinner of orchestral tapestries are formidable. While she brings a painter’s finesse to a composer like Debussy, she also grasps the communicative power of more abstract modernism – no doubt a benefit of her time with the Ensemble InterContemporain in Paris, where she was music director from 2006 until this year.

Along with Debussy’s “La Mer,” which provided a stunning concert finale, Mälkki’s program included rarely encountered Sibelius – a suite from his incidental music to a 1920s Danish production of Shakespeare’s “The Tempest” – as well as Thomas Adès’ luxurious “…but all shall we well” and an electrifying account of Stravinsky’s Violin Concerto with soloist Leila Josefowicz. 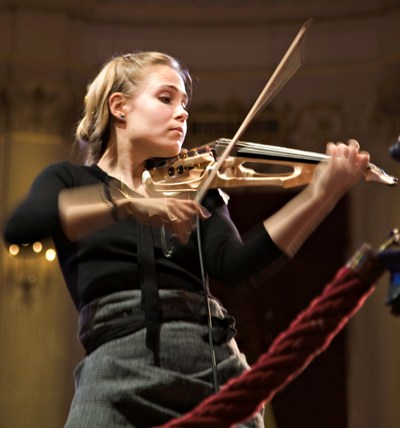 Perhaps the conductor’s hand-in-glove collaboration with Josefowicz bespoke Mälkki’s increasing involvement with opera, but in any case the result was just what Stravinsky might have ordered: a pliant, neo-Baroque dazzler that swept the listener along in a witty, affecting stylistic continuum from commedia dell’arte to something as close to romanticism as that insistently detached composer would ever have allowed.

Josefowicz’s performance, by turns charged and languorous and droll, was a showcase of virtuosity tempered by panache. She sliced into the work’s jaunty syncopations and skittering runs with the same flair she brought to its singing heart. Essentially chamber music writ large, the Stravinsky Violin Concerto is built around transitory alliances between the solo voice and small units within the orchestra, and Mälkki made sure those interludes meshed and sparkled but also blended into whole cloth. For its part, the CSO delivered an edge-of-the-seat performance: precise, buoyant, vital.

The Finnish conductor also made a convincing case for British composer Adès’ “…but all shall be well,” a sort of prelude for orchestra that evolves over its 10-minute course from tiny bell sounds at the threshold of audibility through a richly textured mounting of forces.

Adès took his title from poetry by T.S. Eliot that expresses hope for man even in the face of his mortal frailty. Hovering between the spiritual and the sensual, Adès’ 1993 elegantly orchestrated work is a seductive encounter, and under Mälkki’s perceptive direction, the CSO applied its opulent colors in a performance that waxed from glory to glory – collective affirmation of the title’s optimistic pitch.

Sibelius’ incidental music for “The Tempest,” written late in his career, plays out in concert like a string of study pieces, wisps of intriguing ideas, some developed at moderate length and others gone in a seeming breath. Sibelius fashioned the 10 pieces of his 20-minute Suite No. 1 from a complete score that runs about an hour. The effect is like a series of quick pencil drawings by a master artist.

Whereas certain episodes bear Sibelius’ distinctive fingerprints – the rhythmically pulsing Canon, the coolly harmonized Berceuse, the grand and daunting Storm – other sections suggested a composer venturing outside his stylistic box. Mälkki elicited from the CSO a sympathetic reading that left one hoping soon to hear this conductor and this orchestra exploring the heart of Sibelius together.

Happily, we got just such a rewarding exploration in Debussy, amid the blowing foam and crashes waves of “La Mer.”

This potent and poetic, wondrously detailed reading of French music by the Finnish maestro was conclusive evidence of Mälkki’s ascendancy into the front ranks of the world’s conductors. The CSO answered her imaginative lead with consummate finesse as well as staggering power. The final “Dialogue of the Wind and the Sea” was quite overwhelming in its surge and tempest – not the effect of an orchestra being driven, but of a conductor knowing how to shape and built a complex work, and how to finish it.