Interview: Canadian actor says he tapped into the weight of stress and isolation behind Marc Antony’s famous funeral oration, at Chicago Shakespeare Theater through March 24.

The actor who portrays Marc Antony in Shakespeare’s “Julius Caesar” draws one of the greatest speeches in the Bard’s canon: the dramatically pivotal funeral oration for the slain Caesar. But that opportunity, says Dion Johnstone, whose eloquent and driven Marc Antony fires the current production at Chicago Shakespeare Theater, comes freighted with compact and perilous challenges. 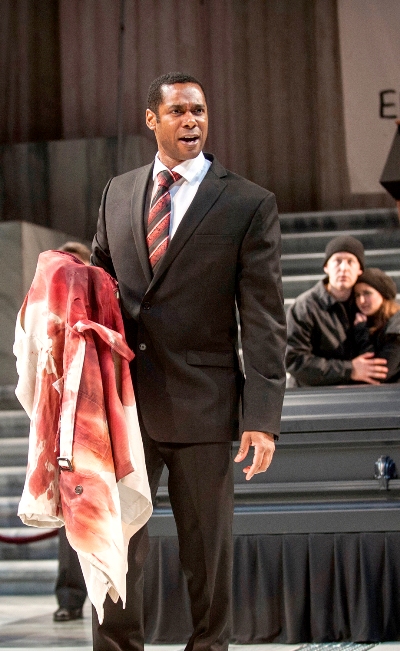 “From the moment Marc Antony enters the Senate and sees Caesar’s bloody corpse, with Brutus and the other assassins all still there, he’s in serious danger and, despite his overwhelming grief, he has to think fast,” says Johnstone. “They really should kill him, too, Caesar’s closest friend and ally. As an actor, I thrive on that feeling of opposition, that natural anxiety that comes when all eyes are on you. I embrace the outsider.”

If Antony is to get his chance to turn the tide of public opinion against the conspirators, he must convince them – their daggers still steaming with Caesar’s blood and emotions brimming over — that he’s not a threat. He must live through this moment.

“The survival instinct kicks in,” says Johnstone. “The scene is so beautifully written. Shakespeare gives you a moment for the over-heated emotions to escape. Antony can’t deny the fact that he was a great support of Caesar’s, but if he shows too much anger, they’re going to kill him. He looks down at the body and, for just a moment, he’s overcome:

Had I as many eyes as thou hast wounds,
Weeping as fast as they stream forth thy blood,
It would become me better than to close
In terms of friendship with thine enemies. 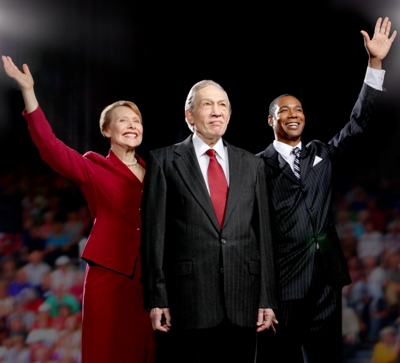 “But he catches himself and says to Brutus and his cohorts, ‘It’s OK, I was just shocked for a second looking at Caesar’s bloody body. We’re all friends and of course I want to hear why you thought Caesar was dangerous.’ Antony gets a break when the conspirators decide he could be useful to them by speaking to the public – if he promises to say nothing against them.”

While Johnstone makes his role debut as Marc Antony here, he is a seven-year veteran of the Shakespeare-oriented Stratford Festival in his native Canada. (Pictured below are his Stratford appearances as the malevalent Aaron in “Titus Andronicus” and Macduff in “Macbeth.) This summer he will return to the festival to play the title role in “Othello.”

It was near the end of rehearsals for “Julius Caesar,” he says, when he grasped the inspiration for Marc Antony’s tide-turning funeral oration.

“He’s left alone with Caesar’s body when a soldier comes in, sees the body and breaks down. Antony says to him, ‘Thy heart is big, get thee apart and weep.’ This is the moment Antony realizes that if the soldier’s reaction taps into me so deeply, what effect could I have on a whole crowd of people?” 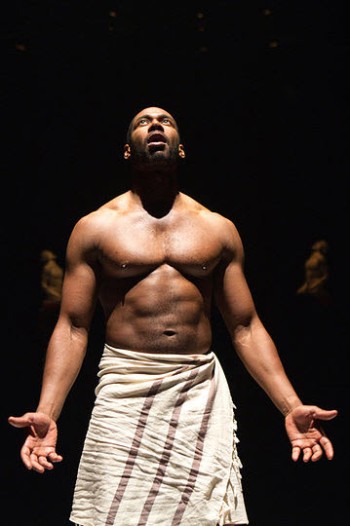 Then, the prodigious speech itself, the turning point in the play and — no pressure — one of the monuments of English-language drama. Johnstone laughs when he recalls his first shot at it in rehearsal. He knew he actually had to convince a tougher crowd than Shakespeare’s rabble. He had to make believers of those rabble-players, his fellow actors assembled before him. And during rehearsals it seemed for a while that he might never actually get the chance.

“We’d run through Brutus’ speech justifying the assassination, and I’d be just off-stage, ready to come on and do it,” he says, “and we’d stop. I felt like a race horse in the gate. I was like, ‘Come on, come on, I’m ready for this.’ Then you finally get out there, and it’s pretty daunting. All those eyes are on you. You’re carrying so much weight.”

Johnstone’s finely calculated delivery of the funeral oration reflects a careful analysis of Antony’s own measured rhetoric. Not only has Antony promised not to speak against the assassins, the actor notes, but he also knows he’s facing a throng freshly won over by Brutus’s powerful case against Caesar.

“He can only speak good, but he can’t start from praise because the crowd now believes Caesar to be their enemy,” says Johnstone. “So he must get them to the point where they feel grief for Caesar. He starts with ambition and slowly begins to make insinuations that make the crowd feel ashamed of themselves for their lack of faith in Caesar. Then he holds up the ripped and blood-soaked mantle and asked what it must have felt like to be stabbed that many times by someone you trusted. 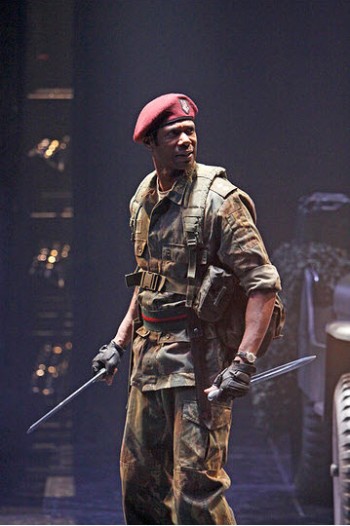 “But he still needs give the crowd a personal cause for siding with him. That’s when he reads Caesar’s will, in which he has left everything to Rome and each Roman citizen. And that clinches it. He has turned the crowd against Brutus.”

Johnstone, who studied acting at the University of Alberta, says the guiding motivation urged by director Jonathan Munby was not Antony’s anger at Brutus and the other conspirators but rather his love for Caesar.

“He wanted that relationship, the love, to be real, rather than self-serving. The impact of Caesar’s death should be tremendously forceful, crippling. It alters Antony’s life forever. That’s what I held on to.”

Photo captions and credits: Home page and top: Actor Dion Johnstone. (Photo by Corey Berry)  Descending: Marc Antony (Dion Johnstone) displays the slashed and bloody robe of slain Caesar to rally the crowd. In better days, Marc Antony at the side of Caesar (David Darlow) with Caesar’s wife Calphurnia (Barbara E. Robertson). (Production photos by Liz Lauren) Dion Johnstone as the Moor Aaron in Shakespeare’s “Titus Andronicus” at the Stratford Festival, and as Macduff in Shakespeare’s “Macbeth” at Stratford. (Photos courtesy of the Stratford Festival)
Tweet