He is a very bright young man, this Hamlet, perceptive and imaginative. But Scott Parkinson’s riveting, mercurial portrait of Shakespeare’s complicated prince, at Writers’ Theatre, also shows us a vulnerable soul with a broken heart, a lad full of life too soon grappling with death, a rebel with a deadly cause.

Parkinson’s performance encapsulates the boldness and finely sinewed power of Writers’ “Hamlet,” a directing tour de force by Michael Halberstam that takes some stunning liberties with Shakespeare’s play but delivers each brash stroke with seemingly unarguable conviction. Even at this early date, it’s safe to say the Halberstam-Parkinson “Hamlet” will be a highlight of Chicago’s theater season.

Beyond the not-so-unusual choice to lop off the opening scene, in which the ghost of old Hamlet appears to the night watch, and a few other common cuts, Halberstam relocates some of Hamlet’s soliloquies, interpolating them into dialogues through stop-action. The scene freezes, a whoosh of sound indicates the prince has stepped outside time and off he goes on a reflective tangent to the conversation at hand.

It is a highly effective device that consistently underscores the whirl and stress of Hamlet’s thoughts as he struggles to comprehend the horrific events unfolding around him: The ghost of his father – played with chillingly reverberating voice by Larry Yando – has accused Hamlet’s uncle of murdering him for his crown, and his mother has hastily married the new king, her recent brother-in-law!

But it isn’t just the hideous, incestuous scene that appalls Hamlet; he can’t bring himself to carry out the vengeance his father’s ghost has demanded and which his own instincts urge. He cannot kill the usurping king, Claudius. This agony of inaction lies at the heart of the play, and Parkinson more than embodies Hamlet’s conflict; he lives and breathes it. In each anguished soliloquy he captures Hamlet’s bitter torment, whether in revulsion at human nature or in despair at his own paralysis.

At the same time, Halberstam’s direction mines a rich vein of often untapped humor. The play’s abundant irony isn’t merely wry here but pervasively funny.  And Parkinson polishes the comedy with winning zeal – notably in Hamlet’s sly unveiling of the king’s spies Rosencrantz and Guildenstern, as he goads them into confessing their ulterior motive for dropping in on him.

Hamlet’s seeming madness also provides laughs as Parkinson’s calculating prince careens in and out of rationality as the moment requires. There is no question that Hamlet is constantly play-acting, overtly so when he joins the visiting troupe of players in the skit designed to assay Claudius’ guilt in old Hamlet’s death.

While Parkinson’s Hamlet vacillates on the key issue of vengeance, he always knows what he’s doing, which mask he’s wearing. One moment he’s caught up in the genuine existential angst of “To be or not to be,” and the next moment he’s wearing the face of madness as he commands poor, befuddled Ophelia to leave this world for a convent – and never increase the number of duplicitous mankind.

Hamlet’s mother, whose hasty coupling with his murderous uncle has destroyed his faith in humanity, comes to sympathetic life in a textured performance by Shannon Cochran that peaks in the private clash between mother and son, when he accuses Claudius of old Hamlet’s murder and implores her to abandon their corrupt marriage bed. Happily, Halberstam avoids the tiresome suggestion of sexual tension between Hamlet and his mom.

But the director serves up a bloody good spin on Hamlet’s impulsive slaying of the man he cannot ignore behind the curtain, the prying, nattering, officious Polonius – done to a roundly pompous, slightly addled turn by Ross Lehman. Hamlet doesn’t just puncture Polonius through the drapery; he kills him thoroughly with the switch-blade shiv he frequently pulls from his pocket as he mulls the things he’s going to do to people.

It would be too little to observe that “Hamlet” blossoms in Writers’ intimate performing space. The gripping sense of immediacy and potency owes everything to the combination of Collette Pollard’s remarkably spacious rock-and-brick set design, Sarah Hughey’s eloquent lighting, Mikhail Fiksel’s evocative sound scheme and David Hyman’s suggestively antique costumes.

And one more thing: The test of swordsmanship between Hamlet and Laertes may be choreographed — indeed it is, by David Woolley —  but even up close the rapier clashes at flashing speed look anything but made-up. Then it gets really intense. So stand not upon contemplation, but get thee hence. Go. ‘Tis not a thing to be missed. 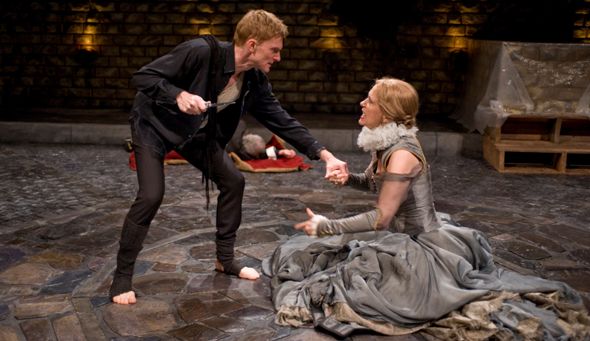